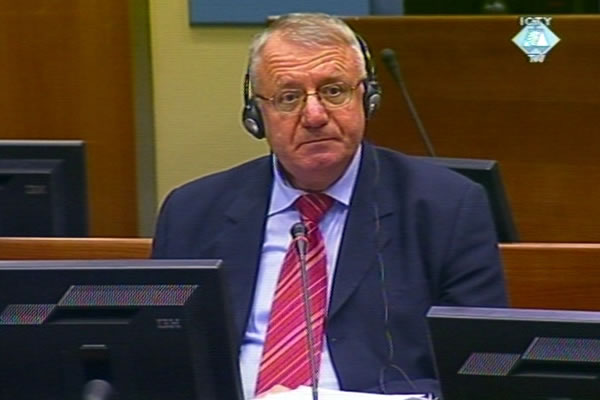 Vojislav Seselj remains in the Tribunal’s Detention Unit in The Hague. The Trial Chamber today rejected Seselj’s motion under Rule 98bis in which he asked for his acquittal after the prosecution rested its case. The Trial Chamber ruled this with a majority vote of the judges Harhoff and Lattanzi, with the presiding judge Antonetti dissenting in part.

The judges were unanimous in their view that sufficient evidence was called to allow a ‘reasonable trial chamber to conclude’ that crimes of persecution, murder, torture, cruel treatment, deportation, forcible transfer, wanton destruction of towns and villages, destruction of religious buildings and looting in municipalities in Croatia, BH and Vojvodina were perpetrated. The crimes are listed in the indictment against the Serbian Radical leader. The judges disagreed over the question whether this conclusion goes for one mode of responsibility only or for all modes of responsibility Seselj is charged with. Judges Harhoff and Lattanzi hold that Seselj’s motion for acquittal at this stage of the trial can be dismissed if there is evidence that Seselj instigated those crimes without going into his role in the joint criminal enterprise, his personal participation in the commission of the crime of persecution, deportation and forcible transfer, and other forms of responsibility.

To prove that an accused is responsible for instigating crimes, it is necessary to prove the existence of one or more acts that represent instigation to commit crimes, to prove that the accused was aware that those acts would lead to crimes and to establish a link between instigation and commission of crimes. The Trial Chamber concluded that all those requirements were met. In other words, there is sufficient evidence that would allow a ‘reasonable judge’ to conclude at the end of the trial that Vojislav Seselj instigated murder, persecution and other crimes listed in the indictment.

The judges established there was evidence of four acts Seselj committed that could be qualified as instigating crimes. First, there is the endorsement of nationalist ideology and advocating the idea of a Greater Serbia to be implemented through the expulsion of non-Serbs from the territory that was to be part of this state. Second, there is the systematic disparagement of other ethnicities by the use of derogatory terms ‘Ustashe’ and ‘balije’ to denote all Croats and Muslims. Third, there is the spreading of an atmosphere of fear among non-Serbs and, finally inciting the Serbian Radical Party volunteers to fight for the idea of a Greater Serbia using any means, including crimes.

Having analyzed the issue of the awareness of the accused that crimes would be committed, the Trial Chamber found there was enough evidence indicating that Seselj knew he was expounding his extremist views at the time of war, when crimes were being committed against non-Serbs. Seselj also knew that some of his volunteers had criminal records and were prone to criminal behavior, the Trial Chamber noted. During the trial, sufficient evidence was called to show that the accused was aware of the influence he had on his followers and that in his public speeches – like the one in the village of Hrtkovci in Vojvodina – he instigated the persecution of non-Serbs.

The Trial Chamber concluded that the third requirement for instigation – the existence of a link between Seselj’s instigation and the actual perpetration of a crime – was met; the conclusion was based on the evidence that the volunteers from the Serbian Chetnik Movement or the Serbian Radical Party committed a number of crimes. Vojislav Seselj had a ‘decisive influence’ on them and he organized their transfer to the front lines.

The decision notes that the Trial Chamber’s findings are based on a series of testimonies and statements of witnesses, some of whom were former ‘Seselj’s men’, and on a number of documents admitted into evidence, primarily Seselj’s statements to the media in the relevant period; the prosecution mostly obtained those from Seselj’s books.

As the morning session drew to a close, presiding judge Antonetti started reading his separate opinion, which runs to 73 pages.