A QUESTION FOR JUDGES: ‘AND WHAT HAVE YOU DONE?’

The Tribunal’s judges often ask witnesses ‘why didn’t you do something to prevent the crime?’. Would it be appropriate to ask the judges a similar question, following the allegations in Judge Harhoff’s letter that the ‘Tribunal changed its course under the pressure of the military establishments of some influential countries’? 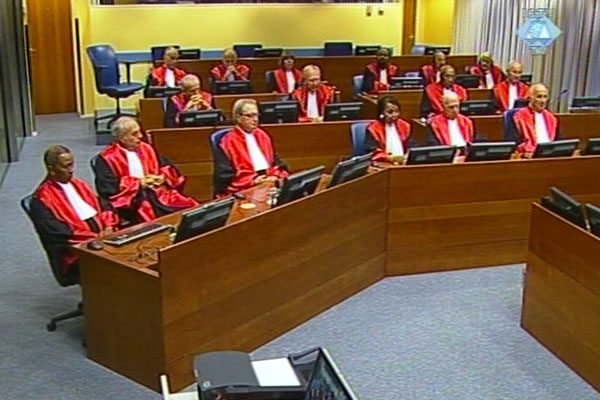 Judges in the Tribunal in The Hague

The question ‘and what did you do?’ has been heard over the past two decades a number of times in the Tribunal’s courtrooms. The judges asked the witnesses who were present at the crime scenes - ‘What did you do to prevent the abuse, arrest, killing, rape…to protect civilians from persecution…? ‘Why didn’t you resist, why didn’t you warn your superiors or subordinates that their actions were unlawful, why didn’t you report them?’.

At the trial for the crimes in Bosanski Samac, Judge Per-Johan Lindholm from Finland in fact asked the accused Simo Zaric ‘why, as a JNA officer, you didn’t kill’ the co-accused Slobodan Miljkovic Lugar when he saw Miljkovic brutally abuse the detainees in the police station yard. Zaric was flabbergasted: he replied that he would have been killed too. ‘That is not appropriate answer’, the Finnish judge retorted.

Would it be appropriate to ask the judges the same question, following Judge Harhoff’s “private letter”.In his letter leaked to the media, Harhoff expressed a ‘deep concern’ – his and of his colleagues – over a ‘strong and unpleasant feeling that the Tribunal changed its course under the pressure of the military establishments of some influential countries’. Would it be appropriate to ask the judges ‘what have you done to prevent this change of course…except whispering about it in the Tribunal’s corridors? ‘Why haven’t you objected to it or warned or alarmed the public…?’

Last week Judge Harhoff did exactly that. However, Harhoff’s letter and the Tribunal’s officials who spoke to the New York Times on condition that they remain anonymous, show that other judges, perhaps as many as half of them, share Harhoff’s concerns and feelings. The big question is: will any of them join Harhoff and express their apprehension about the new course or will the first ‘judge whistleblower’ in the Tribunal’s history be left in the lurch?

Judge Harhoff has allegedly violated the judges’ code of silence, prohibiting the judges from publicly criticizing each other or badmouthing their colleagues. The judges in the Tribunal are simply untouchable.

It was believed naively, as it turned out, that the Tribunal would be kept safe from political interference precisely because its judges come from countries with different, sometimes opposing agendas in the Balkans and/or globally. If any outside force would try to steer the Tribunal to a wrong course through the influence wielded by ‘its’ judge, it was believed that the judges from the competing or opposing powers would publicly denounce and foil any such attempts. Judging by the doubts expressed by Judge Harhoff and his colleagues who share his deep concern and unpleasant feelings in the corridors of the Tribunal, it seems that this mechanism of checks and balances has failed.

But, apart from the corridor exclusively used by the judges, there are many corridors in the Tribunal where the court staff unofficially vent their feelings of deep concern and discomfort, and in fact, of bitterness, dismay and even disgust... over what Judge Harhoff described as the ‘change of the course under the pressure of the military establishments of some influential countries’. Among the Tribunal’s ‘mortals’ this has been felt and expressed more emotionally and dramatically. It is felt at a much more personal level, not only among the staff from the former Yugoslavia who considered the Tribunal as "their own court" for a long time. Now that the judges (or rather, just one of the judges) have dared to go public with their suspicions and concerns, there is no reason for the Tribunal’s ‘mortals’ to remain silent about their doubts and concerns that have thus far been only whispered in the Tribunal’s corridors.

In the “other” corridors, the confidential cables from the US Embassy in The Hague disclosed by WikiLeaks are circulated. The cables show that President Meron has been diligently reporting to 'his' embassy about the internal affairs at the Tribunal. He also sought Washington’s support in an attempt to restrict the independence of Chief Prosecutor Carla Del Ponte and to oppose the renewal of her term of office. The confidential cables portray Judge Meron as the ‘the Tribunal's preeminent supporter of US government’s efforts’, a person whose ‘initiative, priorities and concerns track closely with the US government thinking’.

In the "other" corridors, apart from the confidential cables, rumors are circulated on Judge Meron allegedly close ties with the ‘military-academic establishment’, consisting mostly of American experts on military law and university professors. Acting as amici curiae in 2011 and 2012, the experts warned of ‘broader legal implications’ of some of the Tribunal’s judgments, and their ‘dangerous potential’ to ‘undermine the delicate relationship between military commanders and their legal advisors’.

In other words, the august standards of international humanitarian law and command responsibility were entirely acceptable when applied to ‘small and marginal countries’ of the former Yugoslavia, as Eric Gordy put it. However, things got serious when the 'wider implications' and 'dangerous potential' of these standards were realized. Namely, that these standards might restrict the freedom of action of military commanders, chiefs of general staffs or secret services of some 'more influential states', as Judge Harhoff called them.

According to one school of thought, defusing the ‘dangerous potential’ may not have been the primary intention behind the series of acquittals that have marked Meron’s second term of office as the ICTY president, but it was their ‘natural and foreseeable consequence’. Others find that the acquittals were ‘specifically directed to emasculate the legal precedents’ which will be the Tribunal’s legacy to the international criminal law.

President Meron’s second term of office has also been marked by the unprecedented speed - even 'rushing' - in the delivery of judgments, but only in those cases that have the ‘dangerous potential’.One could hardly describe the process that resulted in the judgment in the Gotovina and Markac case as ‘deliberation’. According to the rumors, the five judges met only once (for one hour or one and a half hour at most), established that the votes are 3 to 2 in favor of an acquittal and went away: the majority refused to further discuss any of the issues with the minority. The acquittals of Perisic, Stanisic and Simatovic followed the same pattern, it has been claimed.

The cases without the ‘dangerous potential’ or ‘broader implications’: Prlic, Seselj, Popovic, Sainovic, etc., proceed at a snail’s pace, as usual. Thus, for example, in the Popovic et al. case the appellate hearing has yet to be scheduled, despite the fact that the Trial Chamber delivered its judgment in June 2010, ten months before the trial judgment in the case against Gotovina and Markac, and fifteen months before the judgment in Perisic case.

If appropriate, this could be the final question to the judges: ‘What have you done to ensure that all the accused have equal treatment before the Tribunal, regardless of any broader implications of their cases for this or that influential state?’