ESCAPE FROM THE CEMETERY

Fahrudin Bilic describes how he survived a mass execution in the Mostar cemetery of Sutina in June 1992. As alleged in the indictment against Vojislav Seselj, the Serb forces killed eighteen Bosniaks and Croats from that region there 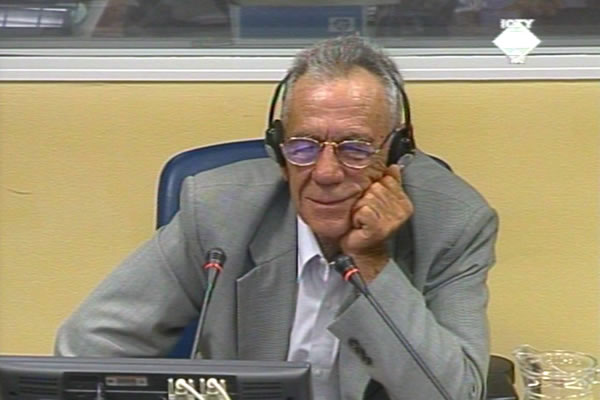 Fahrudin Bilic, witness at the Vojislav Seselj trial
Fahrudin Bilic, decorator from Zalik, a suburb of Mostar, survived a mass killing in Mostar in June 1992, when eighteen Muslims were executed in the city cemetery Sutina. The part of the indictment against Vojislav Seselj on the crimes committed in the Mostar area alleges that the Serbian forces – together with the volunteers called 'Seselj's men' – mistreated and killed many non-Serbs from April to June 1992.

In early April 1992, Serb troops forced about 300 inhabitants of Zalik to spend two months in a local atomic shelter. After a while, the Serbs were taken out, but Muslims and several Croats remained. At first they were guarded only by armed JNA members. As the witness recounted, soon afterwards they were joined by a number of paramilitaries including 'Seselj's men who had thick beards and Chetnik insignia'. One of the soldiers who was in the shelter all the time introduced himself to the witness as a 'Seselj's soldier from Novi Sad'.

In mid-June a group of volunteers, regular soldiers and armed inhabitants, separated some eighty Muslim men from the rest of the people. They were taken along the city streets to the North Camp barracks. The witness was there only briefly because he was transferred to a facility in the city cemetery soon after. There he was held captive with twenty other men in a room, in total darkness. Serb soldiers then started taking some of the prisoners out. 'Frequent wails and machine gun bursts' could be heard afterwards, prompting the witness to assume that the prisoners who were taken out were then mistreated and killed. While he himself 'waited for the same fate', one of the soldiers – with a Serb accent that was 'different', not local – mistreated him, holding a bayonet at his throat.

The witness managed to escape in the early morning hours, with the help from a local Serb, whose name was mentioned in closed session, thus avoiding the fate of the other prisoners whose bodies were found in a pit near the Neretva River. As he fled, he saw machine gun emplacements; those were the guns he had listened to the whole night on the other side of the wall of the room he’d been kept in.

In his cross-examination, the accused Serbian Radical Party leader referred to a statement he received today from a man by the name of Nedjeljko Bojanic, who had lived in Zalik at the time. According to him, there were no volunteers from Serbia in that area. Bojanic admitted he had heard later about the killing of some Muslims in Zalik. He felt it was a 'great shame' but he believed it to be a reaction of Serb forces when they lost their positions and suffered losses from Muslim-Croatian forces. 'I wouldn't call it a retaliation, I prefer to call it genocide', the witness said briefly when Seselj read this statement to him.

The trial of Vojislav Seselj continues on Tuesday with the evidence of a new prosecution witness.