COULD SESELJ BE PROSECUTED FOR HIS ’THREATENING DISCOURSE’ IN THE USA?

Accused Seselj cross-examines the US sociologist who analyzed his nationalist discourse. Seselj suggests that his ’threatening discourse’ and his incitement to violence and violent re-drawing of borders would not be a prosecutable offence in the USA 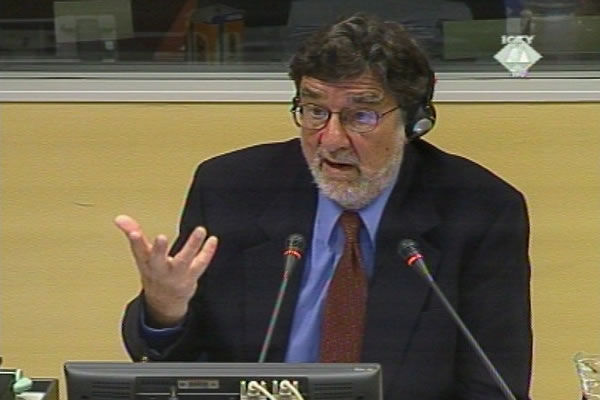 Anthony Oberschall, witness in the Seselj trial
US sociologist Anthony Oberschall concluded today his testimony on the influence of Vojislav Seselj’s nationalist propaganda on the crimes against the non-Serbs in Croatia, BH and Vojvodina. According to him, in his public appearances Seselj made a number of threats and ‘violent messages’, directed mainly at Croats and Muslims. Messages like the need to ‘amputate Croatia’ and claims that ‘rivers of blood will flow’ in BH and Croatia incited mainly volunteers recruited by the Serbian Radical Party to commit crimes.

Substantiating Oberschall’s conclusion about the link between the public appearances of the accused and the behavior of the volunteers, the prosecution tendered into evidence several video recordings made in November 1991 before the fall of Vukovar and immediately afterwards. Seselj’s address to the volunteers in Belgrade before their departure to the frontline was shown first, followed by a recording of what they said in Vukovar. According to Oberschall, when they explained why they had come to Vukovar and what their task was, they merely repeated what Seselj was saying at the time.

Seselj, granted the permission to represent himself, opened his cross-examination of the prosecution witness by ‘challenging the credibility of the witness’. The accused first said that it was ‘a bit odd’ that Oberschall, who has a degree in physics went on to get a doctorate in sociology. Seselj asked the witness several questions about physics and concluded that his answers brought into doubt his credibility, proving that he ‘is no good as a physicist’.

The accused went on to contend that Oberschall’s analysis was incomplete because the sociologist didn’t read a number of Seselj’s books, primarily those in which Seselj purports to have proven that the current and past Roman popes were responsible for all the crimes in the territory of the former Yugoslavia. When he heard some of the book titles, Oberschall laughed, saying he was grateful to the prosecution for not giving him Seselj’s collected works to use in his research, because, as he said, he ’never read science-fiction, and particularly not when doing an expert analysis’.

When the accused asked Oberschall why he didn’t mention hate speech in his report, the witness replied that the term is used ’in an ill-defined manner’ in everyday life. In his report, he preferred to use the term ‘threatening discourse’. According to him, Seselj frequently used it in his nationalist rhetoric.

The accused went on to imply that neither the ‘threatening discourse’ nor other aspects of what he was saying during the wars in Croatia and BH – such as the ’glorification of accepted group’ or ‘calling for violence and violent re-drawing of the borders’ – would be prosecutable offences under the law in the USA. Oberschall, a US citizen, clarified that it would depend on the context in which these ‘inflammatory speeches’ were made. In times of peace, the witness explained, the right to freedom of speech allows you to say whatever you want on TV. But if you call for violence in times of war, when civilians are being killed, then it is a criminal offence, the US professor concluded. Seselj continues his cross-examination tomorrow.