‘CONFUSED AND PUZZLED’ SESELJ GETS A LESSON

US sociologist Anthony Oberschall, the first prosecution witness called at the trial of the Serbian Radical Party leader charged with crimes against humanity in Croatia, Vojvodina and BH, finished his testimony today. The trial continues on 8 January 2008 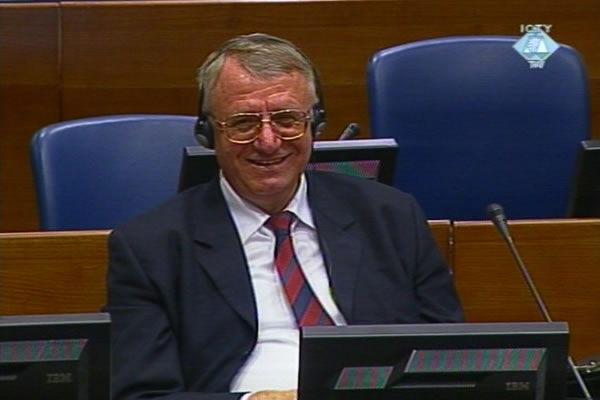 Vojislav Seselj listening to the first prosecution witness
On the second day of his cross-examination of Anthony Oberschall, Vojislav Seselj tried to discredit some of the sources the US sociologist quoted in his expert report on ‘nationalistic discourse’. According to his report, Seselj used this discourse to ‘advocate and justify violence against non-Serbs’

In his report Oberschall quoted Tadeusz Mazowiecki and his conclusions about the role Serbian media played in the incitement of hatred against other nationalities. Seselj called the former Special Rapporteur of the UN Commission for Human Rights ‘a liar’ and a ‘con’ because Mazowiezki stated in a report that Seselj ‘advocated the deportation of Hungarians from Vojvodina’. Seselj claimed that he never did such a thing. Oberschall was not surprised to hear this because, as he said, it was ‘normal for Seselj to label people in this manner’.

Seselj went on to contest Oberschall’s conclusion that in his propaganda activities Seselj used falsehoods, misinformation and misrepresentation of history in order to increase the feeling of ‘victimization’ among Serbs. The US sociologist replied that his report indicated there was a contrast between the number of victims Seselj speaks about and those used by demographers or victims’ associations. Seselj replied that he simply used the ‘official figures’ of 1.7 million victims of WWII and between 600,000 and 700,000 victims of Ustasha Jasenovac camp. Seselj contests the reliability of the estimate put forward by Belgrade demographer Srdjan Bogosavljevic, quoted by Oberschall in his report. According to Bogosavljevic, there were between 896,000 and 1.2 million victims in the Second World War in the former Yugoslavia. Seselj doesn’t accept the findings of the Jasenovac victims’ association, specifying that between 80,000 and 100,000 victims were killed in the notorious Ustasha camp. According to Seselj, these figures are not to be believed because the Association operates in Croatia. It is financed by the Croatian Government, Seselj added, and its members are only the Croatian victims, ‘the only ones who could get out of the camp alive’. Seselj didn’t comment on Oberschall’s clarification that the association’s members were not those who had died, but of their descendants, among whom there were Serbs, Roma, Croats and Jews.

Oberschall’s report mentions Seselj’s ‘persistent warnings to Serbs about the threats of pan-Islamism and Muslim fundamentalism’. The accused asked him today whether he thought the threats were not real. The US sociologist confirmed that he had mentioned this in his report, and clarified that in this he had relied on a work by a group of authors who analyzed the discourse about ‘Jihad’, ‘Mujahideen’, and ‘pan-Islamic extremists’ on the Belgrade TV and Pale TV in the course of the BH war.

When Seselj asked whether he thought the Muslim nation existed, the US sociology professor gave a brief lecture. Oberschall explained that ever since the 17th Century there had been people in Bosnia who either called themselves Muslims or identified themselves as Muslims. According to him, the key issue is not whether somebody officially acknowledged this or not, but how they saw themselves and how other saw them as a nation. Noting that he lectures his students on this topic, Oberschall regretted that Seselj wasn’t able to hear his lecture before, because he would have been less ‘confused and puzzled in his considerations of the issue’.

It was announced today that the trial of Vojislav Seselj would continue on 8 January 2008, after the winter recess.