The trial of Vojislav Seselj continues following the dismissal of the prosecution motion for the disqualification of Judge Harhoff. Goran Stoparic, former Serbian Radical Party volunteer who fought on the battlefields in Croatia and Bosnia Herzegovina, took the stand today 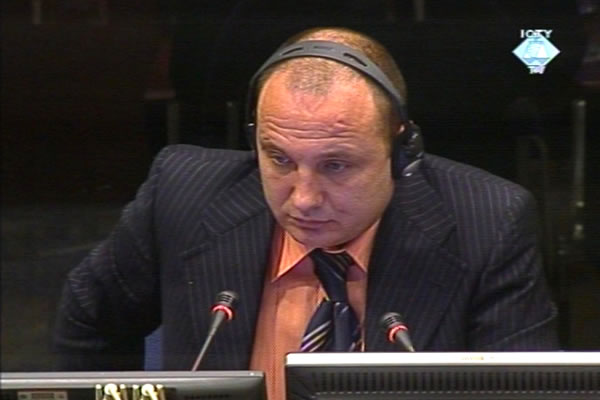 Goran Stoparić, witness
The trial of Vojislav Seselj, the Serbian Radical Party leader, continued today after the ICTY president accepted the recommendation of the three-member panel and dismissed the prosecution motion for the disqualification of the Danish judge Frederik Harhoff. The prosecution filed the motion last week because, in 1993 Judge Harhoff had taken part in interviewing a prosecution witness due to testify in this case. Judge Harhoff was a Danish Helsinki Committee activist at the time. The three-member panel concluded that Judge Harhoff was ‘a relatively peripheral participant’ in the drafting of the Helsinki Committee report which concerned the Vojislav Seselj case ‘only tangentially’.

The first prosecution witness in the trial was Goran Stoparic from Sid. In the fall of 1991, he was a Serbian Radical Party volunteer. He fought first with the Territorial Defense of Slavonia, Baranja and Western Srem and then in the Leva Supoderica unit in Vukovar. He fought with other Chetnik formations in Eastern Bosnia in 1992 and 1993 and finished his ‘war career’ in the notorious Scorpions in Bosnia Herzegovina in 1995 and in Kosovo in 1999. Stoparic already gave evidence on the Scorpions before the Tribunal at the trial of the Kosovo Six. He also testified in court in Belgrade twice, but this was the first time he spoke of the events in Vukovar and the Ovcara massacre.

Stoparic joined the volunteers because he was convinced that his people was in danger. This was the message reinforced by the Serbian media and politicians such as Vojislav Seselj and Vuk Draskovic. Soon after his ‘baptism of fire’ in the fighting for Tovarnik, his Territorial Defense unit was disbanded and he was transferred to Lipovaca. There he took a short training course for fighting in a built-up area. The instructors were a man by the name of Djovani and three or four other experienced Chetniks who, as he said, looked ‘something out of a Veljko Bulajic movie’. He was then transferred to the Leva Supoderica unit, deployed in Vukovar. The Leva Supoderica unit was under the command of Milan Lancuzanin called ‘Kameni’ and Stoparic was soon promoted to squad leader.

Stoparic described Seselj’s unannounced visit to the volunteers just before the fall of Vukovar. Seselj was taken to the front line where he ‘fired some symbolic shots’ in the direction of a house where there might have been some Croatian troops. In Stoparic’s words, Seselj’s visit was ‘a great encouragement’. Although at that time Seselj was ‘described as our commander’, Stoparic ‘took it in an imaginary way, because the JNA was in command of all units, and Seselj merely organized volunteers’.

After the fall of Vukovar, Stoparic noted, he ‘heard that some prisoners were killed at Velepromet’ and that Ovcara was the site of ‘a large-scale execution’. He also heard that a soldier from the Leva Supoderica unit by the name of Topola ‘got himself’ two captured Croats from a JNA military policeman. Topola killed one of them and gave the other ‘as a present’ to the host at the feast of St. Michael. When it was discovered that Topola raped a captured girl and threw her into a well, Commander Kameni kicked him out of the unit. In the spring of 1992, Stoparic met him in Brcko where Topola was the commander of a volunteer unit from Ruma. According to the prosecution pre-trial brief, Seselj was told about Topola’s crimes in Vukovar, and he said, ‘There’s nothing I can do now. Disarm the man and send him home, he’s tired’.

Stoparic believes that the execution of the prisoners at Ovcara was organized by Miroljub Vujovic, local Territorial Defense commander, and that several members of the Leva Supoderica unit took part in it without the knowledge of their superiors. Stoparic’s evidence continues tomorrow.