Former volunteer Goran Stoparic continues his evidence describing how Lasta agency was founded in Sid in 1991. The agency acted as a go-between, arranging swaps of houses and property between Croats in Serbia and Serbs in Croatia. The profit was used to finance the local Serbian Radical Party board 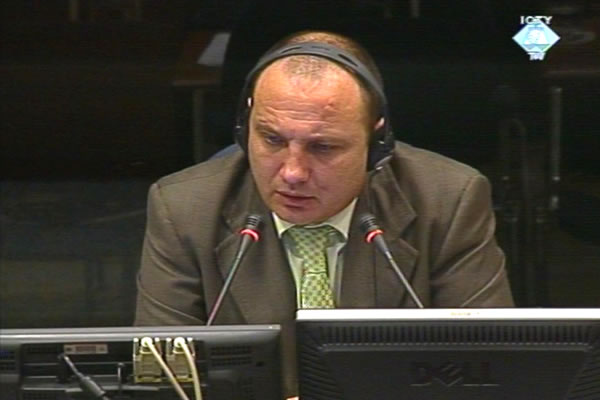 Goran Stoparic, witness in the Seselj trial
Goran Stoparic, former Serbian volunteer who saw action on all the fronts in the former Yugoslavia, from Vukovar in 1991 to Kosovo in 1999, claims that the accused Vojislav Seselj contributed to the ‘awakening of his national awareness’ and ‘his decision to go to war’ to a ‘significant extent’. In his words, in the speeches delivered in the summer of 1991, Seselj warned Serbs of the dangers of ‘the resurrected Ustasha movement and the possibility of a new genocide’. This led Stoparic to conclude that he as ‘a Serb, as a man and as a citizen’ had to take part in the war.

Stoparic joined the Leva Supoderica unit in the fall of 1991. Several members of this unit were tried before the War Crimes Chamber in Belgrade and convicted for their involvement in the murder of more than 200 Croats at Ovcara. Pointing to the link between the unit and the Serbian Radical Party, the prosecution showed a document issued in November 1991 in which Ljubisa Petkovic, chief of the Serbian Radical Party War Staff asks that all SRS volunteers be placed under the command of the detachment.. In another document from same period, the chief of the War Staff demands that all the detachment personnel be issued certificates for the time they fought in the war; yet another document puts forward the commanders of Leva Supoderica unit and Vukovar Territorial Defense for promotion.

Stoparic admitted he had seen several documents from the SRS War Staff on the desk of Milan Lancuzanin Kameni, the commander of the Leva Supoderica unit at the time of the fighting in Vukovar, but he could not be sure about the contents. As a squad commander he ‘didn’t snoop around the commander’s desk’. The indictment alleges that Seselj had control over the War Staff.

Stoparic confirmed he had attended Seselj’s rallies in Sid and in the nearby Croatian village of Kukujevci but at first couldn’t remember – or didn’t want to remember – what Seselj had been saying. After the prosecution refreshed his memory with excerpts from the statement he gave to the OTP, Stoparic recalled that the accused ‘would usually say that some Croats had to move out’ and that he advocated the swapping of houses and property between Croats in Serbia and Serbs in Croatia. It was ‘clear to everybody that there could be no coexistence any more’.

Stoparic's evidence indicates that members of Seselj’s party implemented in the field what he advocated in his speeches. The real estate agency Lasta from Sid played an important role in the exodus of Croats from the village of Kukujevci and other places in Vojvodina. The agency was established and funded by the Serbian Radical Party. Local Croats had to pay if they wanted to be allowed to swap their property with Serbs who wanted to leave Croatia. The Serbian Radical Party was ‘at the other end of the business chain’ as it received a percentage of the profit from Lasta’s owner.