RIGHT QUESTION FOR THE WRONG WITNESS

After a rather long lecture on history and linguistics, Seselj finally came to the gist of the case as the cross-examination of French expert Yves Tomich drew to a close. It turned out, however, that the question he asked was addressed to the wrong witness. The military expert whose evidence is planned for next week will be able to provide the answer 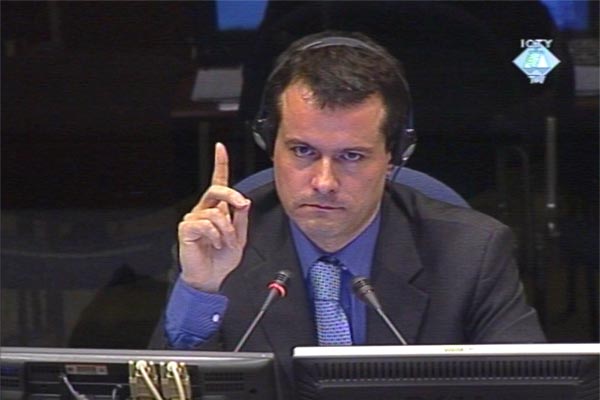 Yves Tomic, witness in the Seselj trial
In his cross-examination of the prosecution witness Yves Tomich, Vojislav Seselj mainly tried to show off his knowledge of history and linguistics. Then, as the session drew to a close, he finally asked some questions on the report drafted by the French expert. In the short lecture on history and linguistics, Seselj started with the 9th Century when the first Serbian state was established, in his view. He then moved on to the Serbian state in the Middle Ages, ruled by Stefan Nemanja, the passing of ’crusaders’, the first Serbian uprising, World War I and finally to the kajkavian, chakavian and shtokavian dialects as tools for determining the ethnic background of various groups in the Balkans.

Seselj spent just last half an hour dealing in more detail with the idea of Greater Serbia and its influence on his policy since the late 1980s – the subject of Tomic’s expert report. The accused first attempted to challenge the criminal nature of the Ravna Gora Chetnik movement of Draza Mihajlovic. According to Yves Tomich, Seselj was his ’intellectual descendant’. Seselj confronted the witness with the claim that Mihajlovic’s Chetniks killed ’only’ 10,000 Muslims in World War II. In his view, this was retaliation and not the result of any intention to ethnically cleanse parts of Bosnia. Tomich replied saying that in the course of his research he obtained the same number, but this covered only the victims from January and February 1943. In all four years of the war, the number of Muslim victims killed by Chetniks was much higher.

[IMAGE]3068[/IMAGE]Seselj was evidently upset by the section of the expert report describing his relationship with Pop Momcilo Djujic. Djujic first promoted him to the rank of a vojvoda – Chetnik war leader – in late 1980s in the USA, and later stripped him of the rank for his collaboration with Slobodan Milosevic. Seselj’s cross-examination of the witness looked more like his testimony and he was admonished repeatedly. As he cross-examined Tomich, Seselj described how Djujic disowned him publicly under American pressure, after a failed attempt to plant an ‘American spy’, Djordje Prica, as his advisor in Serbia. Prica is now the BH ambassador to the USA. Djujic never did strip Seselj of his vojvoda rank because there is no written evidence of it, the accused claims.

Seselj’s last question was the first to deal with ‘the gist of the case’, as the presiding judge remarked. Seselj accused Tomich that in his report he deliberately confused the period when the SRS volunteers went to the frontlines independently and the time when the JNA joined the conflict and took in Seselj’s volunteers as fighters in its ranks. According to the accused, he was ‘in the foreground as the commander’ of these volunteer units only in the first period. This would mean that he rejects the blame for the period that followed. In the end, it turned out that Tomich was the wrong witness for this question. Judge Antonetti said the reply would be provided by Reynaud Theunens, the OTP military expert. His evidence is scheduled for next week. The next prosecution witness will take the stand tomorrow, testifying under the pseudonym 004 and with image and voice distortion as protective measures.