SERBS WOULD BE A MINORITY IN SESELJ’S ‘GREATER SERBIA’

According to Yves Tomic, the author of the expert report Ideology of Greater Serbia in the 19th and 20th Century, Serbs would not have majority in Seselj’s Greater Serbia if there were no ‘transfer of population’ 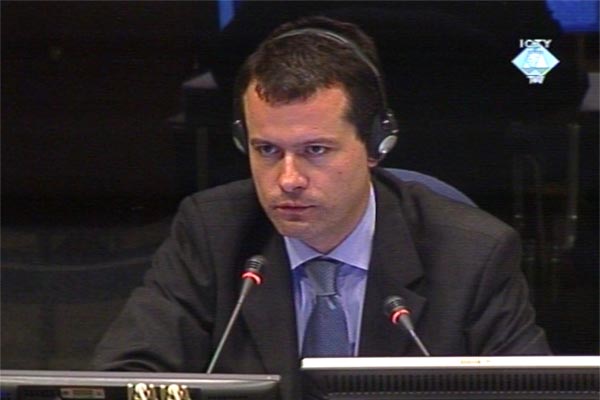 Yves Tomic, witness in the Seselj trial
Seselj’s Greater Serbia project with the border running along the Karlobag-Ogulin-Karlovac-Virovitica line could never have come into being peacefully. Without a ‘transfer of population’ Serbs would hardly have been the majority population in that state.

This is the gist of the answers OTP expert Yves Tomic gave to judges questions whether the objectives set by Vojislav Seselj, his Serbian Chetnik movement and the Serbian Radical Party could have been achieved by any means other than by war and violence. Tomic drafted a comprehensive report for the OTP, Ideology of Greater Serbia in 19th and 20th Century. The report finds that there is a direct link between the Chetnik movement in World War II and the political movement founded in 1990 by the accused.

The establishment of Greater Serbia by political means – negotiations, elections or referenda – would have been ‘extremely difficult’, Tomic said. A large part of the population of Bosnia and Herzegovina, Macedonia, Slavonia, Krajina and other territories east of the Karlobag-Ogulin-Karlovac-Virovitica line would not ‘have been in favor of this concept’. Such objectives could not have been a topic for negotiations as each ethnic community in the former Yugoslavia had its own national projects, Tomic said. Seselj himself used to say that there could be no negotiations with ‘fictitious nations’ such as Macedonians and Muslims, or with Croats he’d call ‘a degraded nation’.

Tomic couldn’t reply off the cuff what the ethnic mix in Greater Serbia would have been without the transfer and expulsion of other ethnic groups following its establishment. A precise answer would require a detailed analysis of the census of 1981 and 1991. However, Tomic is inclined to believe that ‘Serbs wouldn’t have been in the majority in Greater Serbia’. At best, he said, they would ‘have had a relative majority of 50 to 51 percent ‘ and their ‘position would not have been easy’.

[IMAGE]3202[/IMAGE]When Judge Antonetti asked if ‘there could have been a territorial Greater Serbia with a 50 percent non-Serbian population’, Tomic said that ‘the population transfer had been anticipated’. He reminded the judges about Seselj’s plans for the exchange of Serbs living behind the Karlobag-Ogulin-Karlovac-Virovitica line – including 200,000 Serbs from Zagreb and 30,000 in Rijeka – for Croats from Serbia. In his speech on 1 April 1991 in the Serbian Assembly, Seselj clearly advocated the transfer of population as a retaliatory measure. Tomic reminded the court about this speech, quoting parts of it.

‘If Croats expel Serbs from their homes en masse’, Seselj had said, ‘what are Croats here in Belgrade expecting, what are Croats in Serbia expecting? The exchange of population– we will expel as many Croats from Belgrade as Tudmjan has expelled Serbs from Zagreb. When a Serbian family comes in from Zagreb, it will simply head for a home of a Croat living in Belgrade. They will give the Croat their keys and tell him, you go to Zagreb, it’s an exchange…’

As Judge Antonetti saw it, the only thing advocated was ‘an exchange of keys’. As he noted, this ‘didn’t imply force’. The OTP expert rejected such an interpretation. Seselj used the verb ‘to expel’, he observed. This shows the ‘exchange of keys would not have been voluntary’.