Seselj took the opportunity as he commented on the video recording of his speeches from 1991 to join the election campaign and express his opposition to Serbia rapprochement to the European Union, where all the 'Serbian enemies and cons from all quarters of the globe' are 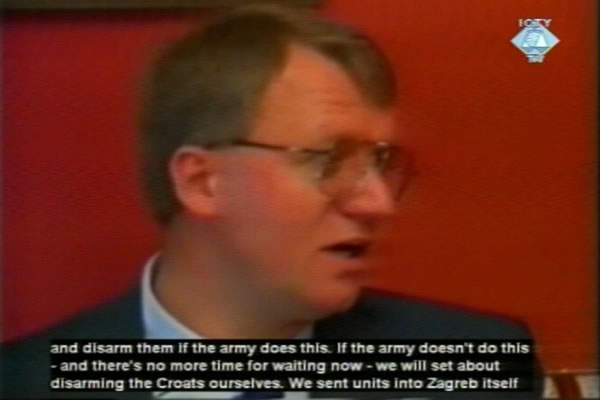 Footage from the interview with Seselj in 1991
Seselj was today able to do in the courtroom what he couldn’t do his Detention Unit cell: he addressed the Serbian public, delivering political messages and airing political views of the Serbian Radical Party. As he commented on the video recordings the prosecution tendered into evidence, Seselj spoke at length about what the SRS thought of 'Serbia's western borders', its joining the European Union and the work of the Tribunal itself. With the permission of the accused, the Trial Chamber today admitted into evidence a dozen more recordings of speeches made by Vojislav Seselj and his associates and followers, tendered by the prosecution. Some fifty videos have been admitted into evidence already.

The video evidence presented today was described by the prosecutor as 'propaganda speeches inciting hatred'. Most of them were made in the spring and summer of 1991, when the Serbian public opinion was being primed for the wars that were to follow. The footage shows that Seselj advocated the expulsion of Albanians and the colonization of Kosovo by Serbs in order to change its ethnic structure. He threatened terrorist attacks against Zagreb and other Croatian cities adding that 'revenge will be blind', and innocent victims inevitable. In some of the speeches, Seselj says that revenge would be fierce but not aimed at civilians.

Seselj didn't object to the footage being tendered into evidence, explaining that he was proud of all his speeches. He stressed in particular that today, as in 1991, he advocated that the Western borders of Serbia should run along the Karlobag-Ogulin-Karlovac-Virovitica line. This remains an SRS policy, he said. The Republic of Serbian Krajina will be 'free' and Serbs will thus establish the new 'Western border'. If this is not achieved now, it will be by the future generations.

After his October 1991 speech, asking for Serbia to oppose the 'ultimatums of the European Union', was shown, Seselj held a brief campaign speech in court on the future relations between Serbia and the European Union. Opposing Serbia’s joining the EU, Seselj noted that it 'isn't our way’, because 'Serbian enemies and con from all quarters of the globe' are gathered there, he said. The only reason why he is on trial before the Tribunal, Seselj said, was his anti-EU stance, adding that non-Serbs were acquitted in most cases.

Protected witness testifying under pseudonym VS-031 was expected to give evidence today. He notified the Tribunal last Friday that he didn't want to testify, in protest against the acquittal of former KLA commander Ramus Haradinaj. He withdrew his name from the list of prosecution witnesses, and offered to give evidence in Seselj's defence. The accused indicated he was not sure he would call him as his defense witness. Apart from him, the prosecution was contacted by Dusan Damjanovic from Kragujevac, who also asked to be removed from the prosecution witness list and to be put on Seselj's defense witness list. Today both Seselj and the prosecutor stated they had never heard of Damjanovic.