In his cross-examination of Sulejman Tihic, president of the SDA party in BH, Vojislav Seselj said that he was 'moved' by Tihic's ordeal, but he nevertheless denied that 'Chetniks' were in any way responsible for the abuse of prisoners of war. The JNA Security Administration and its chief, General Vasiljevic were in fact behind the 'Chetniks', Seselj claimed 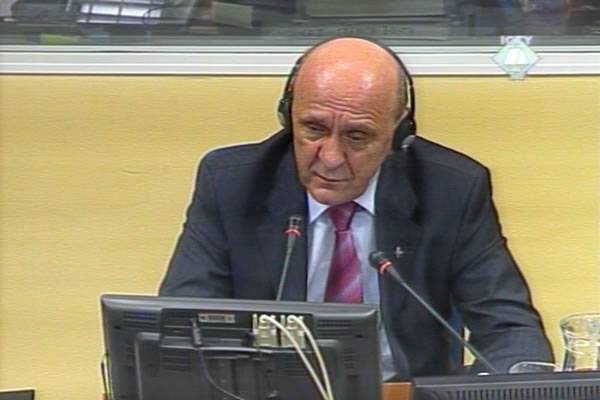 Sulejman Tihic, witness in the Vojislav Seselj trial
Following his testimony in 2001 at the trial of the four men accused of ethnic cleansing in Bosanski Samac and in 2003 at the trial of Slobodan Milosevic, president of the Party of Democratic Action (SDA) in BH, Sulejman Tihic began his evidence today at the trial of Vojislav Seselj. When the prosecution cut down the indictment as ordered by the Trial Chamber, the crimes in Bosanski Samac were dropped. The prosecution has nevertheless been granted permission to call evidence on those crimes insofar as they relate to the pattern, goals and methods of the joint criminal enterprise.

In 1992, Tihic was the president of the SDA in Bosanski Samac. He was arrested together with other local Muslim and Croat leaders when the Serb troops took full control over the town in the night of 16 April 1992. Tihic was first detained in the local police station and a warehouse in the Territorial Defense yard, but was then moved to the JNA barracks, first in Brcko and then in Bijeljina. From there, Tihic was transferred by helicopter to the military air base in Batajnica near Belgrade and then finally to the military prison in Sremska Mitrovica. In each of those places Tihic and his fellow prisoners were severely beaten up, abused and humiliated by being forced to sing 'Chetnik songs' and to kiss photos of 'General Draza'.

During his detention, Tihic was forced to give three TV interviews. One was given to TV Novi Sad, one to Miroslav Lazanski, military commentator of the Belgrade magazine Politika, and the last one to a Western TV channel; this interview was then rebroadcast by the Serbian RTV. Tihic was always interviewed in the presence of 'authorities', a police officer of a JNA security officer, after being cautioned to 'be careful what he says'. Tihic complied with those orders, telling the interviewers he and other prisoners were 'treated well' and that they had everything they needed.

Tihic agreed with the presiding judge that the Serb forces acted according to a pattern: first, the secret services would provoke incidents using their agents, then the JNA would 'establish order' only to withdraw afterwards, leaving the paramilitary units behind to commit crimes. Tihic also confirmed that the JNA, police and paramilitary formations worked in concert. Their operations were coordinated, the witness said; 'it could not have been any other way'.

In the beginning of his cross-examination Vojislav Seselj said that he was 'moved' by Tihic's ordeal, but that 'Seselj's men', or SRS volunteers, had nothing to do with it. Tihic confirmed that none of persons who abused him said that they belonged to 'Seselj's men'. The witness did note that both the accused and his party 'endorsed Chetniks'; Tihic did encounter a fair number of those, as he said.

Seselj , however, claimed that the 'Chetniks' that Tihic encountered in prisons were actually members of the JNA security service, serving under its chief, General Aleksandar Vasiljevic. Noting that the prisoners of war were under the sole jurisdiction of the military police and the JNA security service, Seselj maintained that they 'made a show of being Chetniks' to the prisoners so that the prisoners would blame their ordeal on the 'Chetniks', while in fact the real culprits were 'the orthodox, sworn communists'. Tihic didn't agree with this, but he did accept Seselj's claim that General Vasiljevic 'had to know' how prisoners of war were treated.

Seselj will continue his cross-examination of Sulejman Tihic tomorrow.