‘Academician’ Jovan Glamocanin claims that in early 2001 late Serbian prime minister Zoran Djindjic convinced him that it was necessary to ‘politically eliminate Seselj and to marginalize his SRS’ in the ‘interest of stabilizing the new pro-western government in Serbia’. As Djindjic told him, they were ‘more dangerous for Serbia than Milosevic and his Socialist Party of Serbia’. The court witness has been warned of the risks of perjury 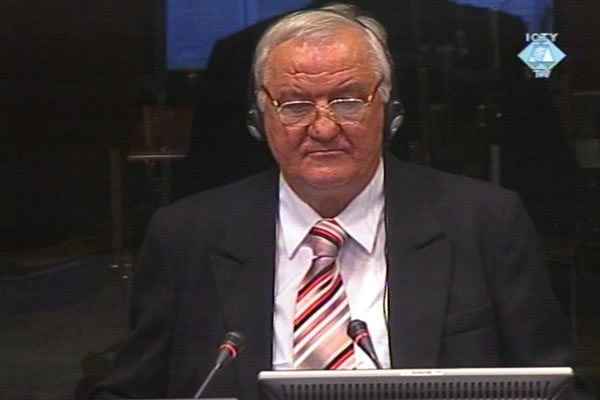 Jovan Glamocanin, witness in the Vojislav Seselj trial
The accused Serbian Radical Party leader Vojislav Seselj and member of the Crimean International Academy of Spiritual Sciences Jovan Glamocanin today forgave each other all the insults and accusations against each other from 1994 when they departed politically to mid 2008 when they grew closer again. Glamocanin forgave Seselj for calling him a ‘fool’, ‘traitor’ and ‘foreign mercenary’ after he left the SRS and for the attempted kidnapping of Glamocanin’s wife as an act of revenge.

On the other hand, Seselj forgave Glamocanin for cooperating with the OTP. In 2003, Glamocanin gave a detailed statement, some 20 pages long, about the role the Serbian Radicals’ leader played in the period covered by the indictment, accusing him of the crimes in Croatia, Vojvodina and BH.

Today, Seselj and Glamocanin blamed their disagreements and conflict as the work of some former and present political adversaries. Glamocanin said that he left the SRS in 1994 because of his disagreement with Tomislav Nikolic and Aleksandar Vucic. He was pressured to cooperate with the OTP by the late Serbian prime minister Zoran Djindjic and the Serbian security service.

In early 2001, Glamocanin contends, Djindjic and Glamocanin went for a walk in the woods in the Belgrade suburbs. Djindjic told him that it was necessary to ‘politically eliminate Seselj and marginalize the SRS’ in the ‘interest of stabilizing the new pro-Western government in Serbia’ and securing Western investments; they were ‘more dangerous for Serbia than Milosevic and his Serbian Socialist Party’, Djindjic said. Glamocanin refused to take part in this plot after he was persecuted by the state security service. The state security agents allegedly admitted to him that they worked on orders of prime minister Djindjic.

Two years later, in May 2003, ICTY investigators headed by Paolo Stocchi knocked on Glamocanin’s doors: Glamocanin was examined for four days and forced to sign a 20 page statement that was not even read back to him. He signed the statement on each page, including page where the interpreter confirmed that the statement had been read back to Glamocanin in Serbian. However, Glamocanin today said this was not true: he agreed to do it to end the exhausting four-day interrogation.

Glamocanin says that everything in the statement can be attributed to investigator Stocchi; it is the result of his ‘cowboy-style questioning’, as Glamocanin put it: Stocchi asks questions and provides answers to them. According to Glamocanin, he received visits by prosecutors Saxon and Dahl, too. They tried to convince him to testify, purportedly lamenting the fact that they would not be able to prove Seselj’s guilt and he would end up being acquitted.

Chief prosecutor Daryl Mundis today categorically rejected all allegations by Jovan Glamocanin, urging the judges to call the investigators and prosecutors as witnesses. If not, the prosecutor said, the prosecution will reserve the right to do so before it rests its case in order to clarify all the details about the interviews with this witness and other witnesses who claim that they have been pressured.

Today, Glamocanin made peace not only with Seselj, but also with the Trial Chamber; the judges had issued a subpoena compelling him to give evidence in The Hague. When the Trial Chamber also warned him about the risks of perjury, Glamocanin said ‘the Serbian nation is convinced that the judges have integrity and will reach a just decision’, noting the ‘particular sympathy the Serbs have for Judge Antonetti who has restored their faith in the Serb-French friendship’.