VESELIN SLJIVANCANIN TO CALL FOR A REVIEW OF HIS JUDGMENT? 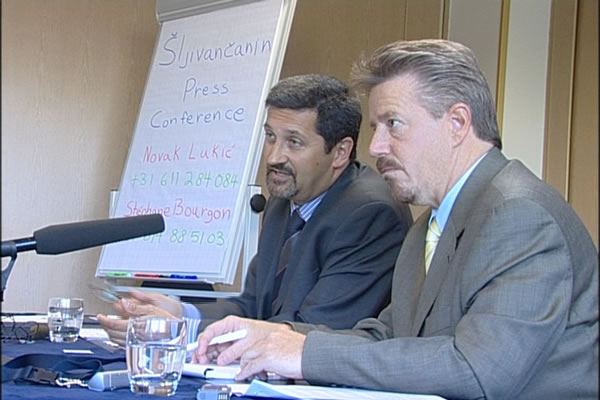 Novak Lukić, branioc Veselina Šljivančanina
Defense lawyers Novak Lukic and Stephan Bourgon have announced they would ‘very likely’ file a request for a review of the judgment of the Appeals Chamber sentencing the former security chief in the JNA Guards Brigade Veselin Sljivancanin to 17 years for aiding and abetting murder of some 200 prisoners at the Ovcara farm on 20 November 1991. The judgment, with a majority of votes of the five-member Appeals Chamber, upheld the sentence of 20 years for Mile Mrksic, the Guards Brigade commander.

According to the Rules of Procedure and Evidence, the defense or the prosecution can submit a request for a review of judgment ‘where a new fact has been discovered which was not known at the time of the proceedings before a Trial Chamber or the Appeals Chamber and could not have been discovered through the exercise of due diligence’. The request, filed within a year after the final judgment has been handed down, is considered by the same Chamber that has delivered the judgment.

At the press conference, the defense counsel noted that ‘since the delivery of the Appeals Judgement, we have received numerous calls from persons who have provided us with information both unknown as well unavailable to this day’. The defense lawyers noted that the information showed that Veselin Sljivancanin ‘was in no way informed by Mile Mrksic of the withdrawal of the Yugoslav army troops" from the Ovcara hangar.

In its judgment of 5 May 2009, the Appeals Chamber states that the Trial Chamber erred when it concluded that Sljivancanin’s obligation to protect prisoners of war ceased at the moment when Mrksic issued the order for the military police to withdraw from Ovcara. According to the judges, Sljivancanin ‘had to know that members of the local Territorial Defense and paramilitary units would most likely kill prisoners of war and that his failure to act would aid the commission of that crime’.

Invoking the International Covenant on Civil and Political Rights, which stipulates that 'everyone convicted of a crime shall have the right to his conviction and sentence being reviewed by a higher tribunal according to law’, the defense counsel note that Sljivancanin didn’t have the right to appeal his conviction in the appellate proceedings. This is why the defense indicates it will ‘investigate all possible options to secure a review of the new conviction and sentence’.

According to the defense, one of the options is to convene an international conference where judges, scholars, prosecutors, and defence attorneys would discuss "the proper course of action to have a decision of the Appeals Chamber reviewed by a different body". The defense will also strive to ‘raise public awareness’ of the problems they had in the appellate proceedings at the Ovcara crimes trial.