WARNING THAT COULDN’T BE IGNORED

Seselj’s ‘warnings’ to Croats in Vojvodina to leave Serbia ‘had to be taken quite seriously’, Witness VS-067, former inhabitant of the village of Hrtkovci in Vojvodina, told the judges today, because at that time Vojislav Seselj was ‘a prominent political figure’ in Serbia and his party had sent its paramilitary formations to take part in the executions in Croatia and BH 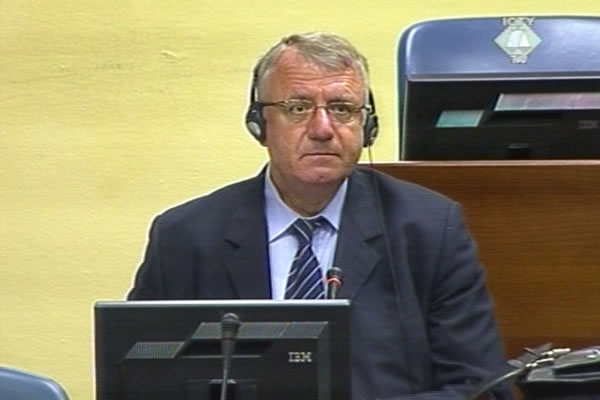 Vojislav Šešelj u sudnici Tribunala
Croats and Hungarians from the village of Hrtkovci in Vojvodina left after ‘warnings’ that were made not only at the Serbian Radical Party rally, but from other places too, including the Serbian Assembly, protected witness claimed today at the trial of Vojislav Seselj.

The witness was called to give evidence by the Trial Chamber. In his testimony via video link, he described how he was forced to move out of the village of Hrtkovci in June 1992. The witness was born in the village and his family had lived there for more than 300 years.

According to the witness, Croats felt particularly threatened after Seselj’s speech at a rally in Hrtkovci in the spring of 1992. The accused purportedly said, ‘It would be better for the Croats to leave now – while they can still swap houses with Serbs from Croatia – than to leave later with their belongings in a plastic bag’.

The witness said he was not in the village at the time. He heard about Seselj’s rally and threats from his neighbors. The witness was told that there was a list of Croats and Hungarians that should leave; his name was on that list. Soon afterwards, groups of Serb refugees from Croatia started arriving in Hrtkovci. According to a report of the Serbian State Security Service from June 1992 used in court today, the Serb refugees ‘caused problems on the road to Indjija with the help of the SRS’.

‘Nobody threatened me directly but I felt uncomfortable’, the witness said. ‘We knew what had happened in Vukovar and in Bosnia and we thought that such warnings couldn’t be ignored, but should be taken very seriously because we didn’t want to end up having to leave our homes with nothing but a bag in our hands, as Seselj had told us’, the witness recounted.

The judges asked the witness why Seselj’s words affected him and other Croats in Hrtkovci so strongly. The accused ‘was a prominent figure in the Serbian politics’, the witness replied; his party had ‘paramilitary formations that took part in what could be called executions in Croatia and BH’. Seselj’s words should therefore be taken seriously. Seselj was different from other Serbian politicians in that he was more ‘straightforward’, the witness said. The others talked about the same or similar issues in ‘a convoluted way, less openly’.

A report from a Serbian Assembly session on 1 April 1992 was shown at the trial. Seselj then claimed that the ‘regime is too lenient towards Croats in Serbia’. Seselj urged that retortion – a form of retaliation against the citizens of Serbia of Croatian ethnicity’ – should be introduced. Croats should be expelled and Serb refugees should be settled in their houses and apartments, Seselj demanded. ‘Croats in Zemun and Slankamen will not be at peace until they move out’, Seselj said then.

The accused Seselj will cross-examine protected witness VS-076 tomorrow.