NEW TWIST IN THE ‘HARHOFF CASE’

The prosecution has filed a motion for a reconsideration of the decision to disqualify Judge Harhoff citing ‘fundamental errors of reasoning’. On the other hand, judges Antonetti and Lattanzi sought ‘clarification’ whether the report of the Trial Chamber’s presiding judge and the statement of the Danish judge had been taken into consideration when the decision was made. The disqualified judge also seeks ‘clarification’. The Tribunal’s vice-president has stayed the appointment of a new judge pending Antonetti’s and Lattanzi’s consultations with Seselj as to whether to “rehear the case or continue the proceedings” 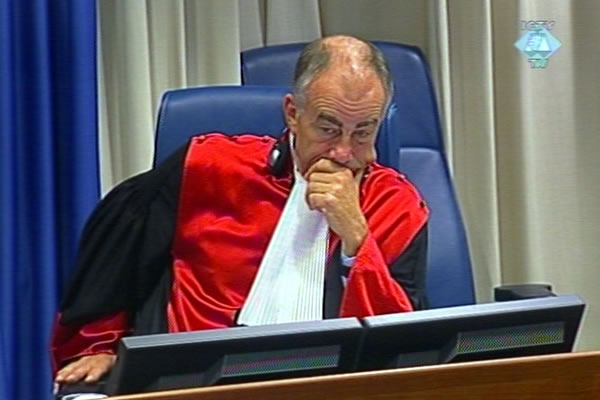 Just as the Tribunal’s vice-president Carmel Agius decided to stay the appointment of a new judge to replace the disqualified judge Frederik Harhoff in the Trial Chamber hearing the case of Vojislav Seselj, an avalanche of motions ensued suggesting that the affair involving the Danish judge is far from over. Quite the opposite.

Judge Agius was entrusted by President Meron to rule on Seselj’s motion for Harhoff’s disqualification. After the majority in the panel of judges supported the Serbian Radical leader’s motion, Agius should appoint a new judge in the Trial Chamber in line with the Rules of Procedure and Evidence, Concluding that the case was in an advanced stage (the judgment was to be rendered on 30 October 2013) Judge Agius decided to stay the appointment and to ask the remaining judges in Seselj’s Trial Chamber, Judge Antonetti (presiding) and Judge Lattanzi, to consult the accused ‘with whom they have long-lasting relationship”. Judges Antonetti and Lattanzi should “consult with the Accused on the question of whether to rehear the case or continue the proceedings”. If the accused withdraws his approval for the trial to continue, Antonetti and Lattanzi must decide whether the trial should continue nevertheless with a new judge who would be appointed at a later stage.

Immediately after Vice-President Agius issued his decision, two requests for ‘clarification’ followed. In the first motion, judges Antonetti and Lattanzi ask Vice-President Agius to ‘clarify’ why the majority decision that granted Seselj’s motion for the disqualification did not specify that the judges had taken into account the report submitted by Judge Antonetti, in line with the Tribunal’s rules, and the memorandum attached to this report which contains the statement made by the ‘accused’ Judge Harhoff.

The disqualified judge asked for the clarification of the same circumstances in a separate motion and in rather harsher tone. Harhoff noted that his right to participate in the proceedings against him was violated. He also claimed that he was not given an opportunity to present his views and to comment on Seselj’s accusations against him.

The prosecution’s motion was the last in the motion avalanche. In a comprehensive and harshly worded request for a reconsideration of the decision to disqualify the Danish judge, which was occasioned by ‘a letter criticizing the changes in the jurisprudence of the Tribunal’, as it was put in the introduction of the motion. According to the prosecution, the decision was based on ‘fundamental errors of reasoning’ since the disagreement on a point of law could not be considered as proof of an appearance of bias. The disqualification of a judge on this basis, the prosecution holds, infringes on the judicial independence of judges and undermines the credibility of the Tribunal. Moreover, in the view of the prosecution the majority in the panel of judges failed to apply the established evidentiary standard and drew conclusions about the purported bias of Judge Harhoff ‘without any evidentiary basis’. The interests of justice ‘require that the decision be reconsidered’, the prosecution concluded.