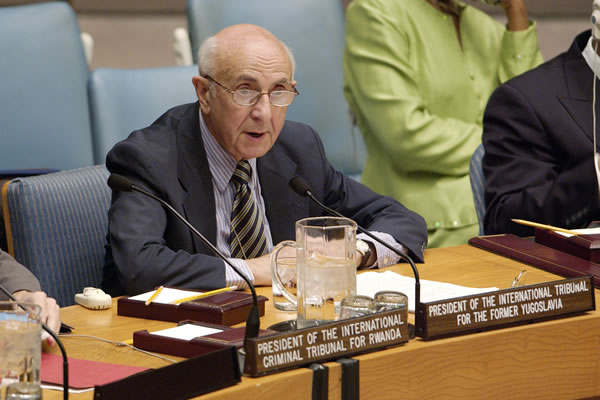 In his latest report to the United Nations Security Council the Tribunal’s President Theodor Meron presented the latest estimates on the progress towards the completion of remaining trials. Judge Meron noted that three trials – those of Radovan Karadzic, Ratko Mladic and Goran Hadzic – were proceeding in line with past forecast. The fourth trial, that of Vojislav Seselj, was a case with ‘special challenges’.

According to the ICTY completion strategy report, the first judgment is expected to be handed down in Radovan Karadzic's case, in October 2015. In Goran Hadzic's case, the trial judgment should be rendered in December 2015, and in Ratko Mladic's case, it is expected in July 2016. The judgment in the case against Vojislav Seselj should have been delivered on 30 October 2014. However, following the disqualification of Judge Frederik Harhoff and the appointment of Judge Mandiaye Niang the trial has been adjourned until further notice. The Trial Chamber has ruled that the trial should resume with the judges withdrawing in order to deliberate on the judgment. Seselj has appealed against that decision, and the Appeals Chamber has not yet ruled on the appeal.

There are also some appellate judgments pending: the Appeals Chamber should render the final judgment in the Srebrenica Five case in October 2014, in the case against former Bosnian Serb police officials Mico Stanisic and Stojan Zupljanin in November 2015, and in the case against the two former chiefs of the Serbian State Security Service, Jovica Stanisic and Franko Simatovic, in December 2014. Mladic’s assistant for security and intelligence Zdravko Tolimir should receive his final judgment in March 2015.The former Herceg Bosna leaders can expect their final judgment in January 2017.

The Tribunal’s chief prosecutor Serge Brammertz stressed the relevance of the two appeals judgments handed down this year, in the Kosovo Four case and in the proceedings against police general Vlastimir Djordjevic. Both judgments, as Brammertz noted, confirmed the responsibility of senior officials for crimes involving sexual violence. Furthermore,Djordjevic's judgment established that ‘specific direction’ was not a requirement for aiding and abetting; this finding contradicted the findings of the Appeals Chamber in the case against Momcilo Perisic. The decisions brought the Tribunal’s case law back in line with customary international law, Brammertz said.

Brammertz devoted a sizeable portion of his address to criticism of the Bosnia and Herzegovina judiciary for the slow implementation of the National War Crimes Strategy. Only one indictment has been issued in relation to the so-called Category II cases. In 2009, the Tribunal transferred to Bosnia and Herzegovina eight such cases. Also, as Brammertz noted, about 350 complex cases will be completed by the end of 2018, three years later than planned. The number of less complex cases pending is even larger, Brammertz said, adding that ‘serious action’ is required if this large number of cases is to be completed by the 2023 deadline. According to Brammertz, the reason for this delay is not ‘solely lack of resources’, but also ‘little commitment by the responsible institutions to prioritize war crimes investigations and prosecutions’.