In the space of just two weeks, two Dutch military officers broke the twenty years of silence to speak about why there was no air support to the Dutch Battalion in Srebrenica in July 1995. Was the film containing the photos of nine men killed in Potocari ‘destroyed while it was being developed’ or was it simply ‘filed away' to cover up the fact that the Dutch knew about the crimes in Srebrenica on 13 July 1995? 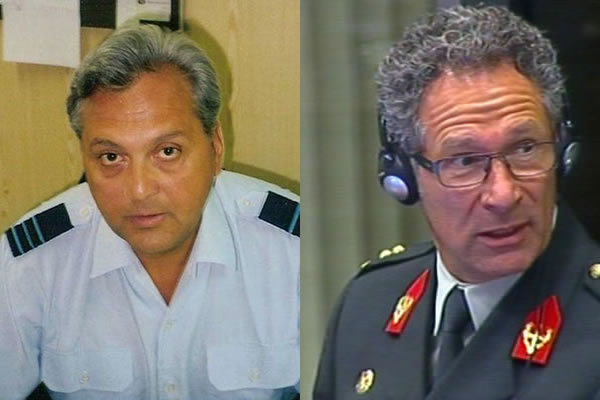 Bart Wagenaar and Johanes Rutten
The ‘specter of Srebrenica’ still haunts the Netherlands two decades after the fall of the ‘protected zone’ and the crimes that followed. Two UN tribunals, the Tribunal in The Hague and the International Court of Justice have qualified the crimes as genocide.

In late May 2015, retired air force officer Bart Wagenaar was interviewed by the Dutch newspaper De Telegraaf. He accused the Dutch government of having ‘betrayed’ the UN Dutch Battalion in Srebrenica. Breaking the 20 years of silence Wagenaar recounted how he heard the then defense minister Joris Voorhoeve order Yasushi Akashi, the UN Secretary General's special envoy, over the phone to ‘immediately suspend all air strikes’ against Mladic’s forces which were approaching Srebrenica. At the time Wagenaar was on duty in the ‘war bunker’ in the Ministry of Defense in The Hague. According to the official version of the events presented by the Dutch authorities over the past 20 years, the UNPROFOR command in Zagreb headed by French general Janvier was responsible for the fact that there was no air support.

After Wagenaar's interview was published, another Dutch military officer decided to speak out. Peter Rutten, a Royal Military Police major, headed the so-called Kodak team, which was tasked with investigating the fate of a film roll with the photos of nine men who had been killed near the UN base in Potocari. The photos were taken on 13 July 1995 by Lieutenant Johanes Rutten. On his return to the Netherlands, he gave the film roll to the military intelligence service. A couple of days later Rutten was told that the film ‘was burned’ when it was being developed, because the chemicals were too strong.

Lieutenant Johanes Rutten has testified at the Tribunal several times. He has always expressed his doubts about the official result of the investigation, that the roll was ‘destroyed by unintentional human error’. Johanes Rutten suggested that the intention was to cover up the fact that by 13 July 1995 the Dutch Battalion already had evidence of the crimes, yet they failed to do anything to stop the crimes. Johanes Rutten testified that a high-ranking officer told him his photos ‘have more ramifications than expected’ and advised him to drop the subject.

In the interview aired last weekend on the Dutch radio, Major Peter Rutten said that the notorious roll with the photos from Potocari taken by Lieutenant Johannes Rutten was ‘not destroyed while it was being developed but is stored in some archive somewhere’. In the two enquiries conducted in 1998 and 1999, Peter Rutten did not check the ‘chain of custody’, before the roll was handed over to laboratory for processing, the former leader of the Kodak team admitted. Now Major Rutten notes that military intelligence Major De Ruijter took the roll from Lieutenant Johanes Rutten. De Ruijter had the roll in his possession for one full day before it was handed over to the lab. It seems that Major Rutten now regrets the fact that he didn’t try to establish in the course of his enquiries what had happened to the roll while it was in De Ruijter's possession.

According to Major Peter Rutten, after two decades the time had come for those behind the mystery of the ‘destroyed’ or ‘archived’ film roll to speak out in public. ‘We are sorry, boys, but the political situation at the time didn’t allow us to act any different’, they could say, Rutten says.

The Dutch media have tried to confront De Ruijter with Rutten’s version of the mystery of the vanished film roll. The former intelligence officer didn’t respond to their calls.