SENSE Center for Transitional Justice has produced an audio visual presentation, which has now been exhibited in the Center for Cultural Decontamination in Belgrade. In a brief and systematic way, the presentation shows the key facts about the Srebrenica genocide adjudicated by the Tribunal in The Hague. The work has been exhibited in collaboration with the Humanitarian Law Center in Belgrade and the SENSE Center for Transitional Justice in Pula 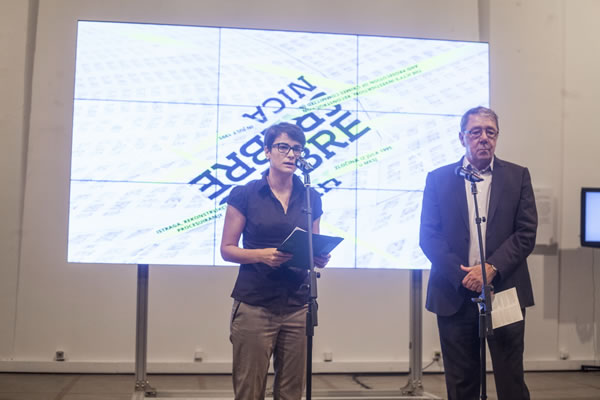 An audio visual presentation mounted by the SENSE Documentation Center – a part of the permanent collection from the Memorial Center in Potocari – can be seen in the Center for Cultural Decontamination in Belgrade as of Monday, 14 September. Visitors will be able to see the presentation till the end of this week. The work has been exhibited in collaboration with the Humanitarian Law Center in Belgrade and the SENSE Center for Transitional Justice in Pula.

The presentation describes in a brief but systematic manner the key adjudicated facts on the Srebrenica genocide, committed by the Bosnians Serb military and police in the summer of 1995. A central screen displays the chronology of the attack on Srebrenica. In the aftermath of the attack more than 8,000 Bosniak men and boys were executed and the remaining population was expelled from the enclave. There are eight more screens set up in the exhibition hall of the Veljkovic Pavillion: they show other topics, from the course of the Srebrenica investigation conducted by the Tribunal in The Hague, the testimonies of the execution survivors, Serb military and police insiders and UN peace keeping troops to judgments, demonstrating why the Srebrenica massacre has been qualified as genocide.

The first to speak at the opening was Sandra Orlovic, director of the Humanitarian Law Center. She recalled that exactly 20 years ago the last stage of the genocide in Srebrenica was underway. The bodies of Bosniak men and boys were transferred from primary to secondary graves to cover up the crime, Orlovic noted. In Orlovic’s words, Belgrade was an important point on the genocide map: Serbian institutions had provided military, financial, physical and political support to the policy that led to ethnic cleansing and later genocide in BH. Mirko Klarin, director of the SENSE Center for Transitional Justice, added that the goal of this and similar presentations was to restore the evidence of the crimes in the former Yugoslavia to local communities, where those crimes were committed, once the Tribunal in The Hague closes down.

Munira Subasic welcomed the visitors in an emotional address. The president of the Association Mothers of the Srebrenica and Zepa enclaves said that she and other Bosniak women were still looking for their children’s bones. Subasic urged the young people to see the Srebrenica presentation but also to come and visit Srebrenica. ’I would like my grandchildren to be able to be friends with kids from Belgrade and Zagreb, but without the truth and justice that won’t be easy’, Subasic concluded. Borka Pavicevic, the director of the Center for Cultural Decontamination, welcomed the audience on behalf of the center.

The presentation can be seen in the Veljkovic Pavillion every day till Saturday from 11am to 7pm.