SERBIA REPRIMANDED AGAIN FOR NOT COOPERATING WITH TRIBUNAL

At a public hearing on Serbia's failure to execute the warrants for the arrest of three Serbian Radical Party officials – Petar Jojic, Jovo Ostojic and Vjerica Radeta – the judges expressed their ‘serious concern’ over Serbia’s lack of cooperation with the Tribunal. The judges noted that Serbia’s continuous assurances that it was willing to comply with its obligations were ‘pointless’ as long as they were not followed by actions 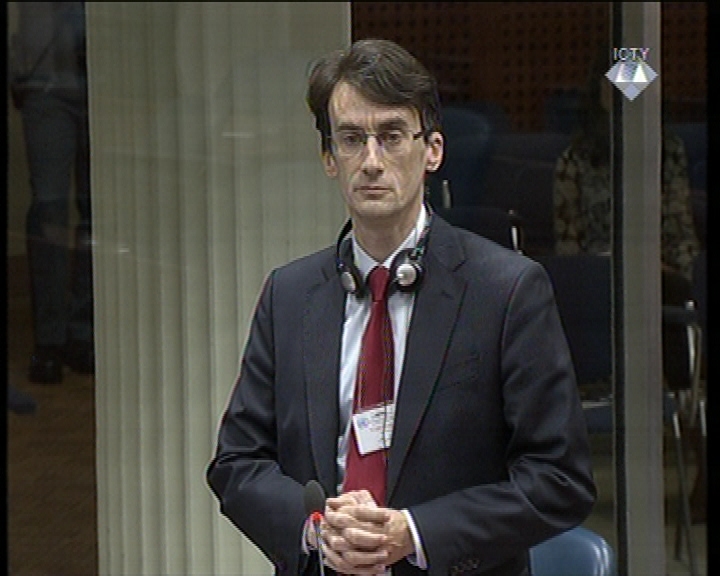 Saša Obradović, Representative of Serbian Government
A hearing was held today at the Tribunal on Serbia’s failure to execute the warrants for the arrest of Serbian Radical Party officials, who have been charged with contempt of court. The indictment alleges that the three accused threatened, intimidated , bribed and otherwise interfered with the witnesses in the case against Vojislav Seselj. The warrants for the arrest of Petar Jojic, Jovo Ostojic and Vjerica Radeta were issued over a year ago, in January 2015. The judges asked the Serbian representatives to explain why the authorities had failed to undertake ‘any sensible action’ to arrest the accused.

‘If I must address only the issue of the arrests , then I have nothing to say’, said Sasa Obradovic, a representative of the Serbian government who attended the hearing. According to Obradovic, the government hasn’t yet decided to transfer the case to a competent judge. The government ‘has to take into account political as well as security elements of the reality it operates in’, Obradovic noted. A political and security assessment of the case is underway, and the Justice Ministry has carried out ‘detailed consultations’.

Serbia is ‘trying to find a model’ to satisfy its interests and to maintain the integrity of the proceedings, which would also serve the interests of justice. In the classified motion to the Tribunal’s President, the Serbian government proposed to transfer the case against the three Serbian Radical Party members to the Serbian courts. The response to the proposal remains classified, although there were indications at the hearing today that the response might well be negative.

‘The Trial Chamber clearly sees that Serbia is not cooperating with the International Tribunal in this case’, presiding judge Orie concluded. Instead of complying with the order, Serbia ‘decided on its own what the interest of justice would be’, Judge Orie said, which means that Serbia ignored the fact that such acts constituted ‘contempt of this international tribunal’. It is not up to Serbia to decide how the interest of justice may best be served, the presiding judge noted.

The judges wanted Obradovic to state unequivocally whether the government intended to comply with its obligation at all, or whether it would ‘take another year to deliberate on the issue’. Obradovic replied that the ‘government understands the Tribunal’s rules clearly’. However, at the moment, the authorities ‘cannot tell how long it will take to comply with the arrest warrant’, Obradovic added. The judges expressed their ‘serious concern’ over Serbia's lack of cooperation. Serbia’s continuous assurances that it is willing to comply with their obligations are ‘pointless’, the judges noted, as long as they were not followed by actions.

Given that deadline for the arrest ‘was long gone’, the Trial Chamber decided to add to Serbia’s obligations. Serbia was ordered to submit detailed reports on what it has done to comply with the Tribunal’s orders every two weeks instead of once a month as before. The first deadline is 24 February 2016. This prompted Obradovic to ask what those reports should contain ‘until the arrests are carried out’. ‘If you don’t know what to say to us, then you should create a situation in which you wouldn’t have to say anything at all’, Judge Orie replied. He clearly meant that Serbia should arrest and surrender the accused without further ado.