Narrative „Targeting history and memory – ICTY and the destruction of cultural and religious heritage“ was presented to the public, followed by a discussion, at the Music pavilion Staklenac in Banja Luka. It was organized by SENSE – TJC from Pula and Banja Luka's civil society organisations Impulsportal and ALK. The panel of speakers included Sead Pašić, Frano Piplović, Srđan Šušnica, Slobodan Rašić Bobara, Dražen Crnomat and Mirko Klarin. Following text is an extract from the article written by Srđan Šušnica for avangarda.ba 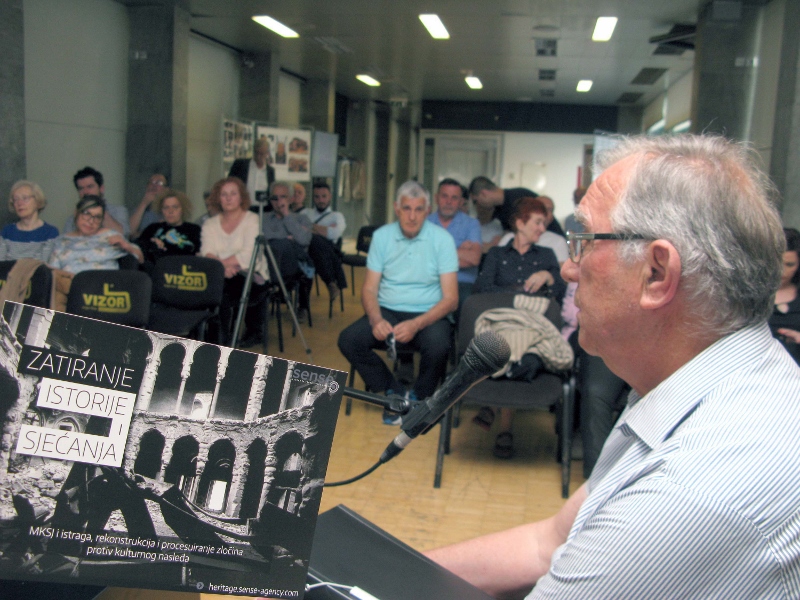 Among thousands of documents, testimonies and pieces of audio-visual material relating to the destruction of cultural and historic heritage in the large archives of SENSE – Transitional Justice Center in Pula, which were presented to the public in Banja Luka on May 25, there is an almost incredible testimony by Milan Tupajić, war-time president of the Sokolac municipal council, given before the Hague tribunal. He declared openly and self-confidently without any qualms: „There is a belief among the Serbs that if there are no mosques, there are no Muslims. And by destroying the mosques, the Muslims will lose a motive to return to their villages“.

Going through the SENSE archives, one is stricken by the proportions of the destruction of cultural and historic heritage in the wars on the 1990's. It was incomparably more widespread that it had been in the previous war. That testifies to the character, goals and means of this last war. Another conspicuous thing is the systematic and resolute nature of behaviour of the war criminals and notable absence of guilt or the feeling that something unlawful or unethical had been done. The impression is that, even though war criminals from Republika Srpska and other regions were trying to hide or conceal mass murders, at the same time they openly engaged in acts of destruction, explained their intentions and bragged about wrecking cultural, historic and religious heritage. Ethno-fascists from Republika Srpska justified the destruction of religious building in a shockingly crystal clear and carefree manner. In his interview for the New York Times in August 1992, Simo Drljača explained: ''With their mosques you must not just break the minarets. You've got to shake up the foundations because that means they cannot build another. Do that, and they'll want to go. They'll just leave by themselves“. What more to add?

They attempted to justify their barbaric deeds in various ways. Tupajić „cleverly“ invoked Serb tradition and beliefs. Some claimed it had been done under pressure and orders from higher ranks. Others tried to justify the destruction by the fact that ''our'' churches, cemeteries and monuments had been ruined elsewhere, therefore what ''we' did was only reciprocating. In his testimony at the Tribunal, war-time president of the Banja Luka council Predrag Radić, speaking about the destruction of the mosques in his town, said: ''That madness was not speciality of the Serbs. Тhis spread from Slavonia here. In Slavonia and Croatia it spread here. All the orthodox churches there had been destroyed and it just continued here.''At the same time, he admits he was clearly aware of the plan. The prosecutor asked: ''What was the purpose, as you understood it, of destroying mosques?'', and Radić replied: ''Same as the destruction of orthodox churches: to destroy the faith, so that people wouldn't go back. To destroy the spiritual basis and they won't bе coming back. It's crazy.''

If it was crazy, why being part of it?! Radić claimed that ethno-fascist leadership of Republika Srpska, whose member he formally was, pressured him to destroy Banja Luka mosques. With a bizarre sense of ''pride'', he said the mosques of Banja Luka were the last to be razed to the ground, a year later than in other places in Republika Srpska.

''The Serbs were blaming me... Because I tried, I prevented them from being destroyed. I, as president of the municipality, was criticised for letting the mosques in Banja Luka stay intact when all other mosques in Republika Srpska had been destroyed!“ The prosecutor insisted that Radic told the court who pressured him to destroy the mosques. 'Who Mr. Karadzic and Мг. Кrajišnik were sending to say that the mosques should bе destroyed? Radić replied: „I don't know if they sent him here, but Velibor ОSТОЛС was on my back all the time. - And he is from where? - Не was like а political-commissioner in the old Russian sense of the word. Не was from Foca. Не was, he was, he held а high position.''

This is not a story about Radić, though, but about an ideology that out of an ordinary man creates the likes of Radić, Brđanin, Kordić, Tupajić, Praljak, Drljača, Karadžić and others. Expert witness Colin Kaiser pointed out: „There are messages that are being sent when sacral buildings are being damaged or destroyed. One part of the message is "we don't respect you, we don't respect your system of belief, we don't respect your culture or psychology." Another one is "we don't want you. Where you find theurban pattern of destruction, which is annihilation, bulldozing a monument, it's like saying, "theyweren'tthere" basically. Or even if you left a cemetery, "well, they were there but they left nothing ofvalue." Rewriting history, you're writing history without the other and the history is written in the cities.

What Kaiser describes is the ideology of blood and soil, which constitutes the base of fascism and nazism. In his testimony Kaiser made what I see as a most honnest statements by a Westerner regarding the Balkans as part of ''European affairs'':''I do not want to sound overdramatic or prophetic, but in all of our societies, there are  movements, there are political parties, people and intellectuals who dream of cleaning their territory and cleaning their history, and the  war in Bosnia-Herzegovina has shown how it can be done and that it can be done.'' 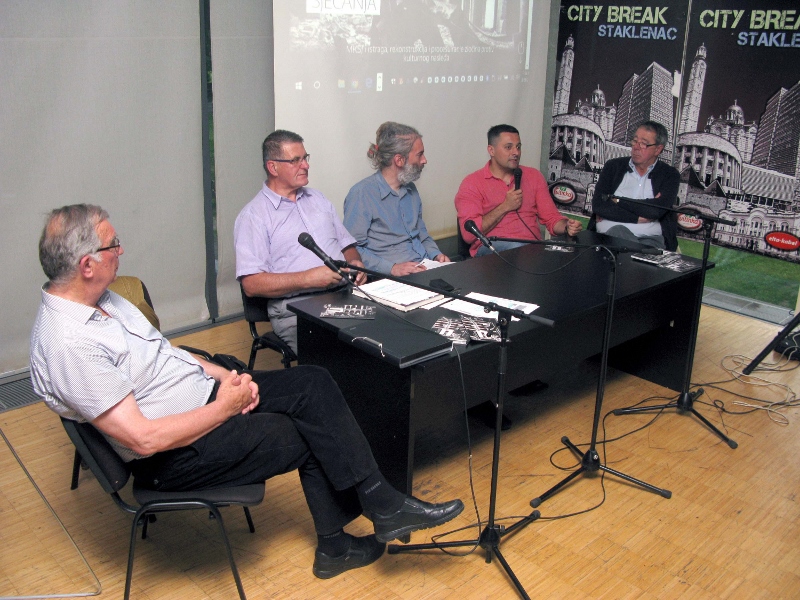