The exhibition displaying the destruction of cultural heritage in the former Yugoslavia opens in The City Hall. It is ''an excellent example of how the legacy of the ICTY must and will remain relevant and impactful well beyond the closure of the Tribunal”, said Judge Carmel Agius 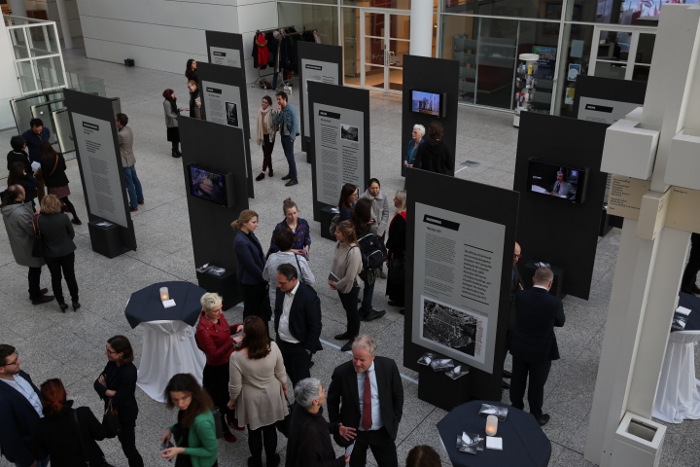 The exhibition Targeting monuments opened yesterday in the Atrium of The Hague City Hall. It displays numerous cases of destruction of cultural, historic and religious monuments during the wars in the area of the former Yugoslavia.

The exhibition is based on the interactive narrative Targeting history and memory produced by SENSE – Transitional Justice Center (TJC), documenting investigations of crimes against cultural heritage and subsequent trials before the International Criminal Tribunal for the former Yugoslavia.

Judge Carmel Agius, until recently the president of the Tribunal and currently the judge at the Mechanism for International Criminal Courts, opened the exhibition in the City Hall. „The destruction of cultural heritage or property is a crime designed to strike at the very identity of a people, and has featured in many of the Tribunal’s cases”, he said. “Indeed, I consider the ICTY’s unequivocal statements – that such crimes constitute crimes against humanity and persecutions – to form one of its most important contributions to international criminal law. This exhibition, therefore, relates to a significant aspect of the Tribunal’s work. Its opening here in The Hague, as well as its display across the former Yugoslavia is an excellent example of how the legacy of the ICTY must and will remain relevant and impactful well beyond the closure of the Tribunal”, noted judge Agius.

Precisely with the aim of preserving the relevance and the impact of the Tribunal's work, SENSE has engaged in producing interactive narratives like Targeting monuments, Srebrenica, Storm in The Hague or Kosovo, said Mina Vidaković Deputy Director of SENSE TJC, on behalf of Director Mirko Klarin . “With the narratives like this one, we are trying to make visible, easily understandable and widely accessible, the heritage of the ICTY“, she added.

Sneška Quadvelieg Mihailović, Secretary General of Europa Nostra, said at the opening that the evidence which had been collected by the Tribunal over a long period of time made it possible for an exhibition of this kind to be shown in The Hague: It „speaks of cultural heritage whose destruction went hand in hand with exodus, mass killings and war crimes, leaving deep scars in the souls and memories of citizens and communities who survived the wars.“

Before its presentation in The Hague, the exhibition Targeting monuments was shown in Zagreb, Belgrade, Sarajevo and in Pula where an international conference was held at the same time dedicated to the issues of post-war reconstruction of cultural heritage and confidence building. It was held in October 2017 and was attended by more that 50 experts from the region, Europe and the US.

The exhibition, the conference and a number of related programmes were organized within a joint project by five civil society organizations from the region and Europe: SENSE – TJC (Pula), Documenta – Center for Dealing with the Past (Zagreb), Humanitarian Law Cneter (Belgrade), History Museum of B-H (Sarajevo) and Europa Nostra (The Hague). It is „a demonstration of the kind of cooperation that the region of the former Yugoslavia needs on all levels“, said judge Agius.

The project Targeting monuments - Targeting history and memory was financially supported by Europe for Citizen's Remembrance programme, National Endowment for Democracy and the Ministry of Foreign Affairs of the Netherlands.

The exhibition in the Atrium of The Hague City Hall is open until 16 April 2018. Photos available on SENSE Facebook Page