MOSQUES WERE DESTROYED BY SERBS, NOT BY SERBIAN RADICALS

Commenting on the conclusions of prosecution expert Andras Riedlmayer on the destruction of Muslim and Roman Catholic cultural heritage in BH, Vojislav Seselj agreed that there was destruction of mosques, blaming it ‘for the most part on Serbs’ but also on Tito’s regime. In fact, everyone is to blame, except his Serbian Radical Party. As Seselj alleged, his party condemned this destruction promptly and is the first to take part in their reconstruction 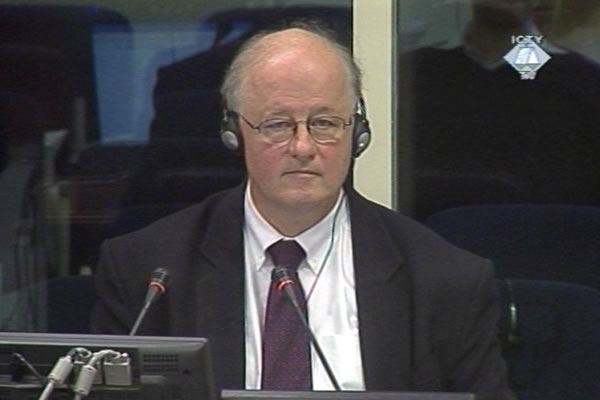 Andras Riedlmayer, witness at the Vojislav Seselj trial
Despite his claim yesterday that he managed to 'expertly destroy’ the report drafted by the prosecution expert Andras Riedlmayer on the destruction of Muslim and Catholic cultural heritage in eleven BH municipalities listed in the indictment, Vojislav Seselj today explicitly agreed with the conclusion the witness reached. ‘It’s a notorious fact that the mosques in BH were destroyed, and that Serbs are for the most part to blame’, Seselj stated, criticizing Riedlmayer for leaving the destruction of Orthodox churches out of his report.

Apart from Serbs, Seselj blamed the destruction of mosques on Josip Broz Tito’s regime. In his opinion, ’the atheist society” promoted during the communist rule in Yugoslavia contributed to ’the reckless and mad’ desecration of religious buildings in the 1990s war. The Serbian Radical Party, the accused said, condemned this. The Bijeljina branch of the party was among the first to do so. To prove this claim, Seselj showed a statement given by Izet Salihbegovic, vice-president of the Bijeljina Serbian Radicals. In the statement Salihbegovic faxed to Seselj, he says that both he and his fellow party members in Bijeljina condemned the destruction of the local mosques as early as in 1993. Today they are the first to financially support the construction of a mosque in Bijeljina. Riedlmayer briefly replied that he was glad to hear that mosques were being rebuilt.

Seselj repeatedly called the witness ’a liar’ although he was warned by the presiding judge that in most cases he was ‘too hasty with this conclusion’. According to Seselj, one of Riedlmayer’s ’lies’ was his claim that about 8,000 persons were killed in the Srebrenica genocide. The accused has different figures he claims are ’generally accepted’: there were 2,500 victims and ‘only’ a thousand were executed, while the rest were killed in combat. As Seselj sees it, ‘this cannot be genocide’. However, The Tribunal ruled that genocide was committed in Srebrenica in the judgment in the case against Radislav Krstic, former commander of the Drina Corps. The International Court of Justice also ruled it was genocide last year. The witness said that both judgments should be taken into consideration when statements about ’generally accepted facts’ were made.

Later today, the prosecution witness testifying under the pseudonym VS 051 will give his evidence in closed session.