SESELJ WARNED NOT TO INTIMIDATE THE WITNESS

In his cross-examination of protected witness VS 1055, Seselj repeatedly accused him of lying. The prosecutor objected strenuously, labeling such claims ‘impertinent and very dangerous’. The judges repeatedly warned Seselj to stop with such accusations which actually serve to ‘intimidate witnesses’ 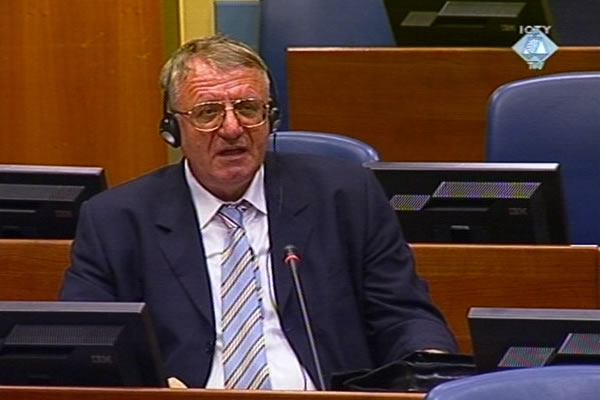 Vojislav Seselj in the courtroom
According to the indictment against the Serbian Radical Party leader Vojislav Seselj, members of a single unit belonging to Seselj’s men killed twenty two non-Serb civilians in the village of Ljesevo in Ilijas, a municipality in the greater Sarajevo on 5 June 1992. According to the protected witness VS 1055, this mass execution took place in a location two or three kilometers from the house where he and about twenty other villagers of Ljesevo took shelter when the Serb forces launched the attack. All of them were first detained in the house and then they were transferred in camps, first in Podlugovi and then in Semizovac. As the witness contends, the attackers of Ljesevo were lead by Vasilije Vidovic a/k/a Vaske from Ilijas. Vaske wore a uniform with Chetnik insignia and had glasses ‘like Draza’. Seselj later promoted him to the rank of a Chetnik war leader and appointed him his bodyguard.

The witness recounted this in his examination-in chief yesterday. Today the accused Seselj showed him a statement he had received in the meantime by ‘war leader Vaske’. In the statement, Vaske says that only local Serbs from Ilijas and its surroundings were members of the unit under his command, denying that there were volunteers from Serbia among them. He also says he has never worn glasses. The witness however stuck to what he said yesterday, adding that he was prepared to ‘face Vidovic’ when and if Seselj called him as a witness.

As his cross-examination continued, Seselj accused the witness of presenting a ‘partial picture’ of the events in Ilijas and BH for the Trial Chamber, because he blamed the conflict only on the extremist members of the Serbian Democratic Party, Chetniks and the JNA who provided Serbs with weapons. According to Seselj, the witness forgot about the role played by the Party of Democratic Action, the Patriot League and the Green Berets.

In addition to Vidovic’s faxed statement, Seselj showed the witness a statement by VRS general Dragan Josipovic. According to Josipovic, one month before the conflict in Ljesevo, members of the Patriot League and the Green Berets attacked Ilijas from three directions, killing nine Serbs. The witness knew nothing of it since his village was not in the conflict zone.

Just as he did with most of the prosecution witnesses who had already testified, Seselj today repeatedly accused the witness of lying. The prosecutor objected strenuously, labeling such claims ‘impertinent and very dangerous’. The judges repeatedly warned him to stop with such allegations which actually served to ‘intimidate witnesses’. Seselj has so far paid scant attention to such objections and warnings.

The trial of Vojislav Seselj continues next Tuesday.