WITHDRAWAL OF SIGNATURE, DENIAL OF STATEMENT

Hostile witness called by the prosecution at the trial of Vojislav Seselj denies ‘more than 90 percent’ of the contents in the statements he gave to the OTP investigators in 2004 and 2006, adding he would ‘withdraw the signature’ if he could 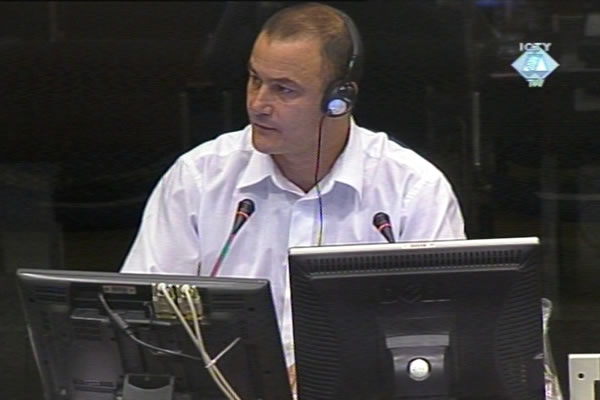 Nebojsa Stojanovic, witness at the Vojislav Seselj trial
The trial of Vojislav Seselj began today with the evidence of prosecutor Saxon who was present during the interview of witness Nebojsa Stojanovic in 2004 and 2006. Saxon was called by Judge Antonetti to clarify the interview procedure, after the witness claimed that ‘90 percent’ of what is written in his statements was misinterpreted.

Saxon said that the witness had both statements read out to him, ‘line by line and paragraph by paragraph’. Everything the witness wanted to be changed was changed. Stojanovic, Saxon noted, was sitting next to the interpreter and could follow the text the interpreter was reading to him on the computer. After the statement was printed, every witness is given an opportunity to read it again before signing it on every page. Saxon, however, couldn’t remember if Stojanovic had done it.

After Saxon, Stojanovic – who was yesterday declared a hostile witness – was brought in to the courtroom. Asking him leading questions the prosecutor attempted to discredit the witness who denied both important and not important parts of his previous statements.

In all three statements he had given earlier, Stojanovic claimed that Milorad Lancuzanin Kameni ‘issued the order to kill all Croats under arms’. According to Stojanovic, the ‘volunteers doing mop-up said they’d killed Croats on the spot, regardless of whether they were armed or not because they didn’t have time to take them to the Velepromet building where the prison was located’. Stojanovic also said that Kameni ‘ordered his group to shoot every Croat they came across’ and that he personally saw 'Seselj's men beat up and cut the throats of five men who had surrendered'.

Stojanovic today claimed that he ‘didn't know who the SRS members in Vukovar were’, that he ‘didn't know Kameni’ and that Kameni ‘didn’t order him to pick up the rifle’. Stojanovic denied his previous claims that he saw Seselj and his volunteers in the training camp in Erdut and that he joined the SRS after he heard Seselj speaking in Vranje. Yesterday he denied that he ever stated that in that speech Seselj said, ‘the Thompson guns in the hands of the Radicals are working again and the Ustashas in Borovo Selo were all killed’.

Stojanovic was today warned that he was under an obligation to tell the truth and that he could be charged with perjury; in the end he wasn’t.

In his brief cross-examination, Seselj focused on the ‘prosecution’s pressure on the witness’ and his decision to ‘testify for the defense and not the prosecution’. Stojanovic claims that he received ‘30 to 50 telephone calls asking him to come and give evidence’ and that he was threatened with jail if he didn't comply with the request. On the other hand, ‘Seselj and his legal advisors’ never pressured him; he changed his mind ‘of his own free will’ because as ‘an intellectual he realized something was wrong’.

The trial of Vojislav Seselj will continue after the summer recess on Tuesday, 26 August 2008.