THE PRICE OF FREEDOM

What price are the citizens of Republika Srpska paying for Radovan Karadzic’s and Ratko Mladic’s continuing evasion of international justice? 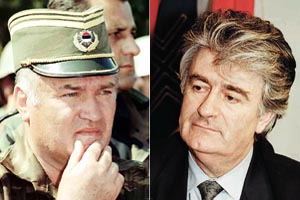 Radovan Karadzic i Ratko Mladic
After the NATO summit in Istanbul, Republika Srpska will probably be served with a hefty "political bill" for the continued freedom of Radovan Karadzic and Ratko Mladic. Every citizen of Republika Srpska, particularly in its eastern areas, is paying the other price—the economic one--of the fact that they have been evading international justice for over nine years.

High Representative Paddy Ashdown described the price in these terms: "If Republika Srpska is visibly poorer than the Federation, if there is disproportionately less investment in it, if there are not enough jobs for its citizens, if no money is invested in schools and hospitals… there is a reason for that. The reason is Radovan Karadzic, the dark curse blighting the entire Republika Srpska. He is destroying the future of the country."

Although no one has precisely calculated all the items in this bill, it is clear that the international community, through financial and other institutions providing assistance to Bosnia and Herzegovina over the past nine years, has been treating RS differently from the other entity, the BH Federation, and the Brcko District. In the first three years after Dayton, RS was, for all intents and purposes, under an international embargo--economic, financial, and every other kind except humanitarian. As a result, notes Zarko Papic, head of the Independent Bureau for Humanitarian Affairs, "Serbs in BH are victims to a much larger extent – not only of the fact that Karadzic and Mladic are not in The Hague, but generally speaking, victims of a horrible policy – than is usually thought.…"

The figures in various analyses of the donations pledged to BH mostly tally. Republika Srpska practically did not participate at the first three donors' conferences after Dayton. According to calculations, funds pledged in the period between 1995 and 1999 at these conferences for BH as a whole amounted to about US$9.7 billion; approximately US$2.5 billion, or 27.6%, was earmarked for Republika Srpska. Finally, at the end of 2002, after aid was cut down and postponed (usually with the explanation that the entity "was not cooperating sufficiently with the international community, particularly with the Tribunal in the Hague”), the amounts were substantially different from those that were planned.

Indeed, RS has so far received about US$1.4 billion in foreign aid, evidently much less than the amount that was planned, which was never above a fourth of the total aid for BH anyway. At the second donors' conference in 1996, for instance, 2% of the aid gathered for BH as a whole was earmarked for Republika Srpska, compared to 98% for the BH Federation.

According to Dr. Papic's "conservative estimates," in the first three years after Dayton, Republika Srpska lost over 500 million dollars on the priority reconstruction project coordinated by the World Bank alone. One must not forget the funds it lost out on in a number of "bilateral donations," let alone the towns and areas which were under a direct embargo, such as Prijedor, Foca and others.

When one keeps in mind the fact that in all these years the Republika Srpska’s economy has failed to pick up, that its agriculture is virtually destroyed, that the émigré community expected to receive aid from the country instead of remitting funds to it, it is clear that the economic and social consequences have been catastrophic for the entity’s citizens. Eight years after Dayton, as Dr. Papic notes, "the Federation is much more developed than Republika Srpska, although the two had roughly equal starting points." According to Zeljko Kopanja, director of the Banja Luka Nezavisne novine newspaper, the average wage in the Federation "is almost twice as high as in RS, pensions are 60 to 70% higher, the industrial growth in the Federation is visible, while in RS it is actually dropping." All this, he says, "speaks to the economic ruin of Republika Srpska…."

The story of Karadzic thus continues as the story of the impoverishment and plunder of RS, carried out in other, more direct, ways. Milorad Dodik claims that in the spring of 1997, the former SDS leader personally took about 36 million German marks in cash from the vault of the RS Central Bank in Banja Luka. Soon thereafter, both Karadzic and the money disappeared without a trace.