Former leader of the Serbian Radicals is opposed to the motion to join the indictments and to try him jointly with Jovica Stanisic, Franko Simatovic and Milan Martic. His reasons are that he has "always been in conflict" with Stanisic and Simatovic and does not have "anything in common" with Martic 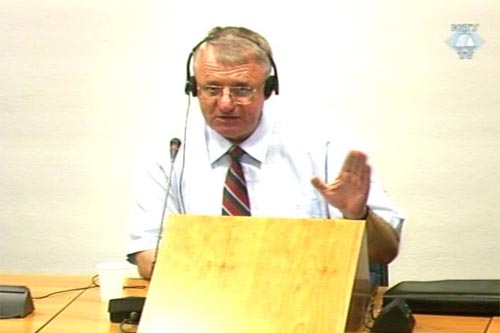 Vojislav Seselj during the status conference
The prosecution today filed a motion for joinder of indictments against Vojislav Seselj, Milan Martic, Jovica Stanisic and Franko Simatovic, in order to try them together. Prosecutor Hildegard Uertz-Retzlaff made this announcement at the close of the status conference in the case against Seselj today. She thus confirmed the "rumors" the accused had spoken about earlier.

Seselj immediately objected to this prosecution motion, noting that he and the volunteers of the Serbian Radical party "never had anything to do with the police, but only with the JNA". According to him it would be more appropriate to try him with the former chiefs of the JNA General Staff, Veljko Kadijevic and Blagoje Adzic. Seselj claims he has "always been in conflict" with Jovica Stanisic and Franko Simatovic, and does not have "anything in common" with Milan Martic. When Seselj added that he had "more in common with Milan Babic," Judge Carmel Agius warned him not to "put his horse before the cart" and not to say things that might do him more harm than good.

Seselj also wanted to know if the motion for joinder of indictments included Goran Hadzic. He claims he knew "where he is and who is guarding him". Because of this knowledge, Seselj is convinced Hadzic will never be caught and is concerned that this might be used as a pretext to delay his trial. The prosecutors replied that "it would make no sense to seek joinder with a case of an accused who is still at large". This means that Hadzic could join the others only if he arrives in The Hague before the trial of the four accused actually begins. If not, Hadzic's case could be referred to the local courts, probably in Croatia.

If the judges grant the motion, the trial of Vojislav Seselj, Milan Martic, Jovica Stanisic and Frenki Simatovic could begin in the first half of next year.