SLJIVANCANIN AND LAWS OF PHYSICS

Previous prosecution witnesses claimed that Major Sljivancanin had called and chaired the meeting with the hospital staff in the morning of 20 November 1991. Now witness Zvezdana Polovina testifies she saw the major in the hospital yard at the time. The defense notes their client is "not a man defying the laws of physics". The prosecutor says that in the yard, Sljivancanin "was calming down women, in order for the men to be separated and later killed at Ovcara" 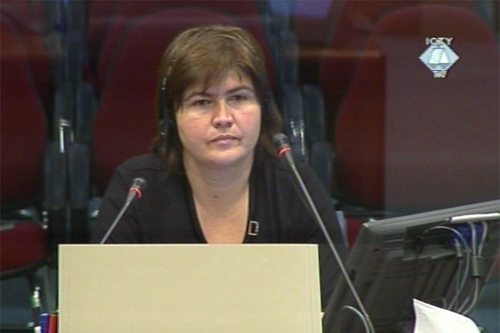 The witness, who was awaiting evacuation on 20 November 1991 in the Vukovar hospital said yesterday that a JNA soldier had ordered her, her husband and a female colleague from the Vukovar Radio to leave the hospital building. Major Sljivancanin was standing at the way out, the witness said, directing the men to go to the left and women to go to the right.

Sljivancanin's defense counsel Momcilo Bulatovic asked the witness today whether the medical staff was in the yard when the men were being separated from the women. The witness said no, and then the defense counsel reminded her of the statement she had given to the OTP investigators in 1995. There, she stated that the medical staff had been in a meeting with the JNA at the time. Zvezdana Polovina confirmed that the hospital staff had indeed been at the meeting, repeating that Major Sljivancanin had been in the yard at the time. According to the indictment and previous prosecution witnesses, the meeting in the hospital plaster room was called and chaired by Major Sljivancanin himself.

Noting that the defense was not "challenging the claim that Sljivancanin was in the hospital on 20 November," the defense counsel added that his client was not "a man defying laws of physics and space" by his ability to be in two different places at the same time: in the hospital yard and at the meeting with the medical staff. According to Bulatovic, the testimony of Zvezdana Polovina today confirms that "not everything is the way the prosecutor imagines it to be".

In an exchange that ensued between the prosecutor and Sljivancanin's lawyer, prosecution team leader Marks Moore interpreted the presence of the accused in the yard and the assurances he gave the women at the time that their husbands would soon join them as proof of his intent "to calm the women down, in order for the men to be separated and later killed at Ovcara".

The prosecution will start the examination-in-chief of Mara Bucko tomorrow. She was a nurse in The Vukovar hospital. Her husband was taken away to the JNA barracks. It was at her initiative, as previous witnesses testified, that a list was made of all the husbands of medical staff who had been taken away. Thanks to that list, they were brought back from the barracks to the hospital a few hours later.