At the Ovcara massacre trial, the prosecution delivered today its closing argument. Colonel Mile Mrksic "had enough forces and resources to take measures and solve any situation that might have occurred" in his area of responsibility. Major Veselin Sljivancanin "had total control over the evacuation of the Vukovar hospital and the separation of the patients and the injured”. Captain Miroslav Radic controlled the Territorial Defense troops and "Seselj's men”. The parties will present their recommendations for the sentencing tomorrow 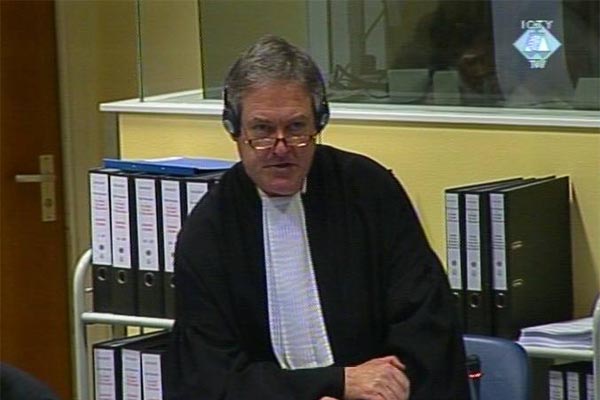 Marks Moore, prosecutor in the Mrksic, Sljivancanin and Radic trial
The prosecution’s closing argument at the trial of Mile Mrksic, Veselin Sljivancanin and Miroslav Radic began with the same video that on 11 October 2005 opened the trial for the killing of 264 persons at the Ovcara farm. The prosecution believes that the aerial video of Vukovar, taken several years after the siege ended, shows the degree of destruction in what came to be known as the "Croatian Stalingrad".

In the closing argument that took about four hours, the prosecution focused on the identification of the accused Major Sljivancanin: a number of witnesses testified that on 20 November 1991 Sljivancanin had been in the Vukovar hospital, in the JNA barracks and at the Ovcara farm. On that morning, some 300 sick, injured and other persons were taken out of the hospital to the JNA barracks and finally brought to the Ovcara farm. As the prosecution alleges, there they were left at the mercy of the local Territorial Defense troops and Seselj's men. These troops went on to execute 264 persons at Grabovo, one kilometer away from Ovcara.

Sljivancanin was the chief of security in the Guards Brigade and Operations Group South, but the prosecution argues that his authority was equal to that of commander Mrksic because he had conferred this authority on him. Veselin Sljivancanin "had total control" over the evacuation and the separation of people in the hospital, prosecutor Moore said, adding that everything that happened that day "passed through Sljivancanin's hands".

Although Mrksic delegated the command of the evacuation to his chief of security, the accused colonel remains responsible for the events in his area of responsibility. Moore claimed that Mrksic "was briefed on all relevant issues" and "had total control over the subordinate forces", adding that Mrksic "had enough power and resources to take measures and solve any situation that might have occurred”. He could have prevented the Ovcara massacre. Mrksic was "correct in military matters, but hard", the prosecutor said quoting Ambassador Okun, who had gone on to say that "it was a polite way of saying that Mrksic was brutal".

The prosecution argued that Captain Miroslav Radic had a de facto and de iure control over the Territorial Defense units and Seselj's men who had actually committed the massacre at Ovcara. He was “well aware of their criminal and violent behavior". He was also aware of the fact that he was a participant in the joint criminal enterprise and of the role he played in it.

The prosecution will make a recommendation for a sentence for the three former JNA officers at the beginning of tomorrow's session. The Trial Chamber will then hear the closing arguments of the defense counsel representing Captain Radic and Colonel Mrksic. Veselin Sljivancanin's defense counsel will deliver his closing argument on Friday.