‘CHETNIKS’ FOUGHT SHOULDER TO SHOULDER WITH HVO AND ABDIC’S TROOPS

Prosecution witness Goran Stoparic started his career as a soldier in 1991 when he joined the ‘Chetniks’ and ended it in the Scorpions in 1999. As a volunteer of Seselj’s Serbian Radical Party in the Republika Srpska army, he fought side by side with Croats and with Abdic’s ‘Muslim army’ against the BH Army 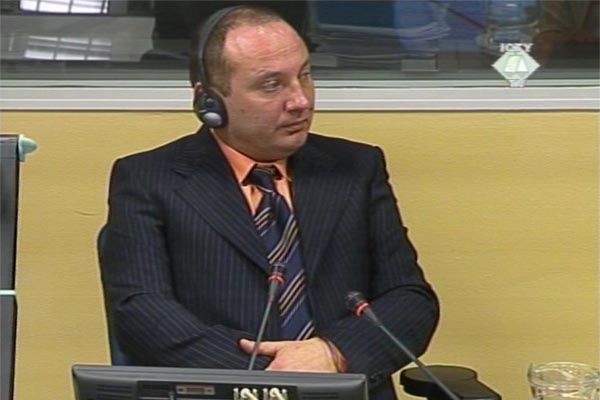 Goran Stoparic, witness in the Seselj trial
Goran Stoparic is testifying as a ‘Chetnik insider witness’ at the trial of Serbian Radical Party leader Vojislav Seselj. Today he perplexed the judges when he said that he had fought with Croats against Muslims in the fall of 1993. The judges couldn’t understand how he had ended in Zepce where he had fought ‘shoulder to shoulder with the HVO members’ against the Muslims in the BH Army; Stoparic himself was a ‘Seselj’s volunteer’ from Sid who had fought in 1991 in Vukovar in the Leva Supoderica detachment. Then in 1992 he went to Herzegovina as the deputy of Chetnik military leader Vakic and in the fall of 1993 he became the commander of a Novi Sad volunteer company, part of the VRS. He ended up fighting with the HVO against the BH Army.

‘I understand your confusion. You will find it much more puzzling when you hear that I fought together with Muslim troops against the Muslims’, Stoparic told the judges. He explained that he had gone to Zepce in accordance with an agreement of the VRS and the HVO. Later, when Republika Srpska reached an agreement with Fikret Abdic, Stoparic went to Cazinska Krajina where he fought against the BH Army 5th Corps. ‘That’s politics’, he concluded philosophically.

Seselj wanted to convince Stoparic that he had been expelled from the Serbian Radical Party in late 1993 because he had ‘cooperated with Croats’. As the party president, Seselj advocated an alliance with the Muslims and was against Croats. According to Stoparic, the reason given for his expulsion was that he ‘did not toe the party line and obstructed its work’. In his view, he was expelled because the president of the local SRS chapter accused him of collaborating with the State Security Service. Once he realized how much Seselj cared about pushing through his version of the events, Stoparic did ‘allow the possibility’ that the reason for his expulsion was his cooperation with Croats; this constituted ‘a violation of party policy’.

In 1992, Stoparic was fighting with the SRS volunteers – no longer as part of the JNA but of the VRS – in some of the locations where crimes Seselj is charged with were committed. This led the accused to read out parts of the indictment describing the crimes in Brcko, Nevesinje and Mostar area to the witness, asking him if he had any knowledge of them. Apart from the murders Goran Jelisic committed in Brcko, Stoparic didn’t hear of any of crimes listed in the indictment. As Seselj put it to him, he should have known of them if they had been committed by SRS volunteers. Stoparic was their commander, as Vakic’s deputy.

Not contesting the fact that there were crimes, Seselj blamed the local paramilitary formations, ‘the self-proclaimed Seselj’s troops’ and Vuk Draskovic’s ‘Serbian Guard’, present in Eastern Herzegovina at the time when the crimes were committed.