Vojislav Seselj claims that the migration of Croats and other non-Serbs from the village of Hrtkovci in Vojvodina might have been motivated by ‘economic reasons’; prosecution demographer Ewa Tabeau counters this claim, saying that the ’forcible migrations’, a result of the conflict, replaced the ’development motivated migration’ prevalent in the 1980s 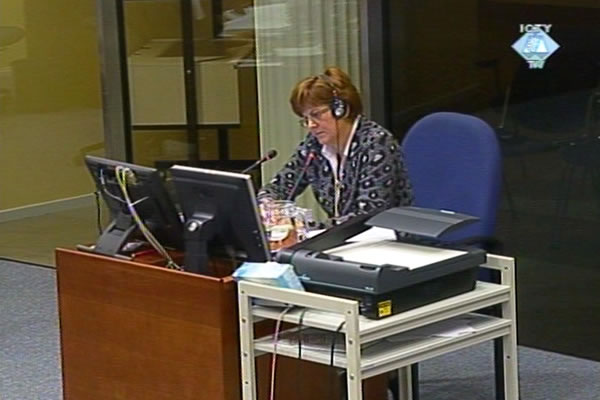 Ewa Tabeau, witness in the Vojislav Seselj trial
In an effort to contest the expert report demographer Ewa Tabeau drafted for the prosecution, Vojislav Seselj, Serbian Radical Party leader, maintained that the migration of Croats from Hrtkovci might have been motivated by economic reasons. According to the 2002 census, there were about 250 Croats and 2,500 Serbs in the village. In comparison with the 1991 census figures, the number of Croats decreased four times while the number of Serbs increased almost five times.

As Seselj put it, in the decade preceding the conflicts in the former Yugoslavia, Vojvodina had a negative population growth rate because of the low birth rate and migrations where people left their homes in search for a better life. Tabeau explained in her reply that the trend of ’development-motivated migrations’ prevalent in the 1980s was replaced by the ’forcible migrations’ in the early 1990s resulting from the conflicts. The reasons for the emigration might have been political, she went on to note. According to her report, most Croats left Hrtkovci in mid-May following a speech Vojislav Seselj made. As alleged in the indictment, in that speech Seselj called on the Croats to move out of the village.

Referring to the expert report authored by Svetlana Radovic, demographer retained by the defense, Seselj brought up examples of some villagers of Hrtkovci who declared themselves as Croats in 1991 only to ‘open their eyes’ ten years later and declare themselves as Serbs. Ewa Tabeau noted that Svetlana Radovic’s reports were ‘not impartial and contained errors’, concluding that she would have to verify the data the accused referred to.

The accused also tried to challenge the methodology Ewa Tabeau used in her report. As Seselj sees it, the only correct sources for the research on migrations are the censuses of 1991 and 2002; they were conducted in Serbia and in Croatia. Church records, refugee lists submitted by the Croatian authorities and a list of Croats who moved out of Hrtkovci published in a book by a local parish priest, Seselj pointed out, are not a reliable source for the research on the shifts in the ethnic structure. Tabeau disagreed, saying that church records are ‘an excellent source’ because they contain information about all the key events in people’s lives.

The hearing today ended abruptly when the presiding judge said there was a fire drill and that the courtroom had to be evacuated. Ewa Tabeau’s cross-examination is expected to finish in the first half of the hearing tomorrow.