Today Dr. Vesna Bosanac recounted what she knew about events preceding the Ovcara massacre in her evidence at the trial of Vojislav Seselj. She also spoke about the presence of ‘Chetniks’ in Vukovar. Seselj refused to cross-examine the witness. He did, however, bring up a new conspiracy against him, headed by the ICTY Registry, his former party colleagues Vucic and Nikolic and the US and British intelligence services 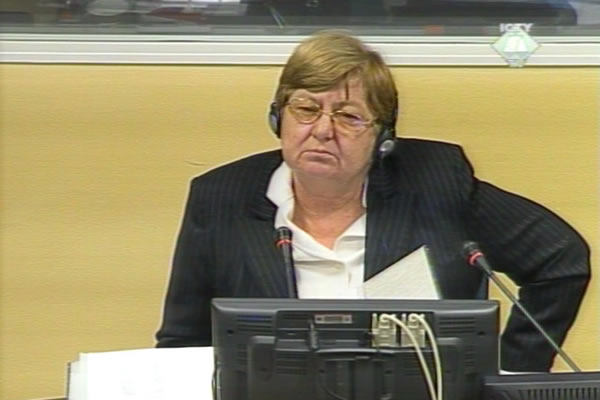 Vesna Bosanac, witness in the Vojislav Seselj trial
The current director of the Vukovar General Hospital Vesna Bosanac served in that capacity in November 1991 when some 200 persons were taken out of the hospital and executed at the Ovcara farm. As one of the key witnesses of the events preceding the first mass killing in the wars in the former Yugoslavia, Bosanac has given evidence before the Tribunal four times: twice in the trial of the three former JNA officers indicted for the crimes in Vukovar, once at the trial of former Serbian president Slobodan Milosevic and once at the trial of former Vukovar mayor Dokmanovic. Today she appeared before the Tribunal for the fifth time as a prosecution witness at the trial of Vojislav Seselj.

The statement Dr. Bosanac gave to the OTP investigators in September 2008 was tendered into evidence today. The prosecutor read a brief summary of the statement in which the witness recounts that many civilians and Croatian soldiers took shelter in the hospital before the JNA and paramilitary units entered Vukovar, hoping they would be evacuated according to an agreement signed on 18 November 1991 by the Croatian government and the JNA.

The agreement was violated and instead of being evacuated, some of the people Serbian troops found in the hospital on 20 November 1991 were taken to Ovcara and executed. Another group was detained in the Velepromet warehouse in Vukovar and the third group, which included Dr. Bosanac, was transferred to a prison in Sremska Mitrovica in Serbia. According to the prosecution, the most important part of Dr. Bosanac’s statement establishes a link between the persons who to Dr. Bosanac’s knowledge were in the hospital on 20 November 1991 and the list of victims whose remains were later exhumed from the mass grave in Ovcara.

According to the indictment, the volunteers ’drafted and/or instigated’ by the leader of the Serbian Radical Party Vojislav Seselj took part in the Ovcara massacre. In her replies given to the presiding judge Dr. Bosanac described how she saw unruly men with beards, who were full of hatred. The accused Seselj, she contended, was ’if not the highest then one of the highest’ commanders of those men. As Dr. Bosanac noted, she heard that piece of information on the Serbian state radio she listened to during the siege of Vukovar.

The accused Seselj again refused to examine the witness whose statement was admitted into evidence through a written statement. He did address the court before Dr. Bosanac appeared to complain against the Registry decision extending the ban on privileged telephone communication. He also claimed he knew ‘for a fact’ there was a conspiracy against him afoot.

The conspiracy to prevent any contact with the outside world, Seselj explained, is headed by the ICTY Registry and involves his former party colleagues Tomislav Nikolic and Aleksandar Vucic, the Serbian media, tycoons and the intelligence services of the world powers. According to Seselj, Nikolic and Vucic have been instructed by the US and British intelligence services to conduct a campaign against Seselj in the media controlled by tycoons, alleging that he has put a contract out for their murder. The Registry in turn then prohibits him any contact with his legal advisors and family. ’I am not paranoid, I know that the US and British intelligence services are controlling the trial because of their geostrategic interests in the Balkans’, Seselj concluded, noting once again that he was ’superior’ to other lawyers before the Tribunal.