During Dr. Vesna Bosanac’s testimony, the presiding judge put to her a 'theory' of the accused Vojislav Seselj that the Ovcara massacre was perpetrated by ‘local Territorial Defense members bent on revenge’ and not by the SRS volunteers. The director of the Vukovar Hospital replied that the volunteers, members of the Territorial defense and the JNA ‘worked together’. Why did judge Antonetti ask Seselj to ‘try and restrain himself’? 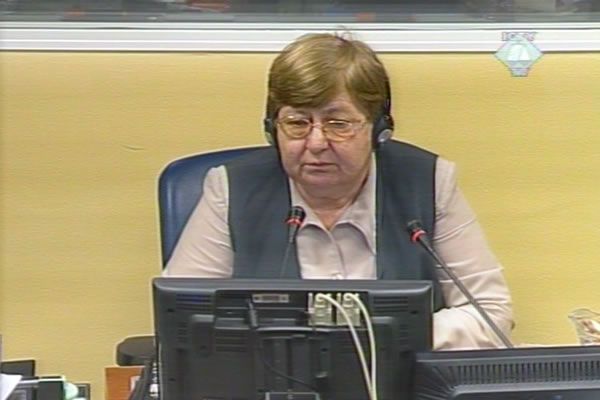 Vesna Bosanac, witness in the Vojislav Seselj trial
Leader of the Serbian Radical Party Vojislav Seselj has persistently refused to cross-examine witnesses whose testimony is tendered into evidence in the form of written statements. In such cases, the witnesses are examined first by the prosecution and then by the Trial Chamber headed by presiding judge Antonetti. Judge Antonetti today made it clear that he would ask questions ‘the accused refused to ask’ in order to ‘get at the truth’. The examination-in chief of Dr. Vesna Bosanac, the director of the Vukovar hospital, continued in that vein. In her written statement to the OTP investigators and in her evidence yesterday Vesna Bosanac recounted what she knew about the events preceding the massacre of some 200 Croats at Ovcara on 20 November 1991.

Judge Antonetti put to the witness Seselj’s theory that the Serbian Radical Party volunteers were not responsible for the execution, but local Territorial Defense members. They were bent on revenge on their erstwhile neighbors. The SRS volunteers allegedly withdrew from Vukovar before 20 November 1991. Obviously convinced that Dr. Bosanac couldn’t give significant information about the whole ‘theory’, Judge Antonetti left out a part where Seselj contends that the prisoners were surrendered to ‘keyed up local volunteers’ in accordance with a plan conceived by JNA general Aleksandar Vasiljevic.

Dr. Bosanac replied that she herself often wondered how that happened. She would always arrive at the same conclusion – that the JNA, the volunteers and the Territorial Defense members worked in concert. In her opinion, if the army had ‘wanted’ to, it could have saved the men at Ovcara instead of leaving them at the mercy of the volunteers and local TO members. To corroborate her allegation, Dr. Bosanac said that the JNA arrested 174 injured persons and some hospital workers, including herself, and took them to prison in Sremska Mitrovica. The same could have been done with the people from Ovcara, she contends.

Today Dr. Bosanac conveyed to the judges the ‘disappointment’ of the citizens of Vukovar with the Trial Chamber’s judgment for the former JNA officers, Veselin Sljivancanin who was sentenced to five years, and Miroslav Radic who was acquitted on all counts for the Ovcara crime.

As Dr. Bosanac’s evidence drew to a close, the accused used some ‘derogatory’ words to address the witness, according to the prosecution. The alleged insults were redacted from the transcript. This was not the first time that the accused treated witnesses in that way, the prosecutor went on to say, noting that this was one of the reasons why the Trial Chamber should grant the prosecution motion to assign defense counsel to Seselj. Seselj was then cautioned by the presiding judge, who asked him to ‘try and restrain himself’ in situations where he didn’t like a witness’s testimony.

After Vesna Bosanac, the prosecutor called retired colonel Milorad Vojinovic, former commander of the JNA 80th Brigade, who was among the last persons to see the Croats taken from the hospital to Ovcara while they were still alive.