SESELJ’S CONSPIRACY THEORY GETS A BOOST 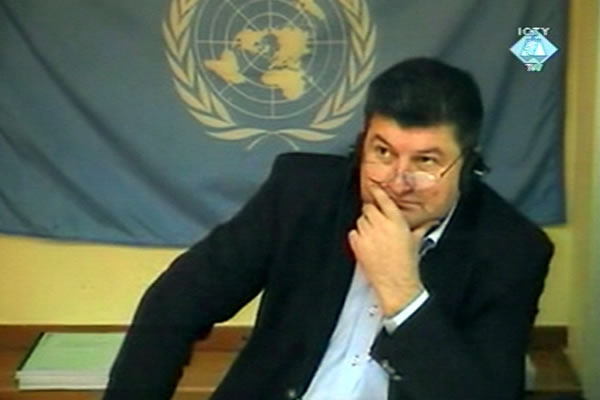 Aleksandar Stefanovic, testifying by video-link in the Vojislav Seselj trial
The first secretary-general of the Serbian Radical party, Aleksandar Stefanovic, appeared today in the ICTY office in Belgrade as an unwilling witness after he received a subpoena to testify via video link at the trial of Vojislav Seselj. In 2003 and 2006 Stefanovic gave statements to the OTP investigators describing how the SRS was created and how it functioned in early 1990s and its role in the war. Today, however, Stefanovic tried to deny his own statement.

When the prosecutor asked him if he signed the statements he gave to the OTP investigators Stefanovic said ‘yes and no’: he ‘did sign but didn’t state’. This prompted the judges to ask for a clarification. The witness thus got a chance to give Seselj’s conspiracy theory a boost. According to the theory, the late Serbian prime minister Zoran Djindjic ‘ordered’ the indictment against Seselj from the then chief prosecutor on 17 February 2003. Seselj still propounds this theory regardless of the fact that the prosecutor in this case has already noted that the indictment against Seselj was confirmed on 14 February 2003, three days before the alleged ‘pact’ between the late prime minister and the former chief prosecutor.

According to Stefanovic, he was the focus of this conspiracy. Djindjic and Carla Del Ponte persuaded him in February 2003 to ‘politically discredit’ Seselj and thus assist in the effort to indict him. Stefanovic claims he was promised he would not be called to testify before the Tribunal. In the meantime Stefanovic parted ways with the Serbian Radical Party, joining Christian democrats, who were in the coalition government at that time. Stefanovic allegedly ‘gave in’ and let himself be persuaded. He gave his first statement to the OTP on 15 February 2003. This statement was confirmed by the second statement he gave in September 2006. Prime minister Djindjic was killed in the meantime, and Stefanovic no longer claimed he was pressured by Djindjic, but justified his actions by saying he was in a ‘bad mental state’ which led him to consume ‘tranquilizers, sleeping pills and alcohol’.

The Trial Chamber indicated today it would decide at the end of the trial whether to admit the controversial statements and what evidentiary value to give them. For the time being, the only relevant thing is what the witness stated before the court. Among other things, the witness said that in the early nineties the Serbian Radical Party advocated ‘the establishment of an independent and democratic’ Serb state comprising today’s Serbia and Macedonia, BH and parts of Croatia. Stefanovic still believes that this was a viable solution; he brought up Hitler’s annexation of the Sudeten and Austria to Germany as an example. The German fuehrer, the witness noted, would not have been punished for those deeds had he stopped there.

In his statements to the OTP investigators the witness described the role of the SRS War Staff saying that in 1991 it ‘drafted volunteers and sent them to frontline under the auspices of the JNA’. Today, however, Stefanovic contended that this body was given such an ‘awful name’ by mistake; the War Staff itself was in fact a ‘humanitarian organization’ helping Serb refugees; on rare occasions it provided transportation to volunteers with no money who travelled from the parts of Serbia to Belgrade. As Stefanovic put it, the chief of ‘humanitarian’ War Staff Ljubisa Petkovic, who was the vice-president of the SRS, was responsible to the SRS president, Vojislav Seselj.

As the hearing drew to a close, the accused began his cross-examination of the witness who was a member of the Serbian parliament for five years.