Vojislav Dabic, the witness called by the Trial Chamber at the trial of the Serbian Radicals’ leader Vojislav Seselj, for the most part recanted what he had said in his statement to the OTP in 2004, claiming his words had been mistranslated. He also claimed that parts of his statement where he talked about the involvement of Seselj’s men in the crimes were ‘probably inserted by the prosecution’; alternatively, he heard from other people the things he then told the prosecution in those statements 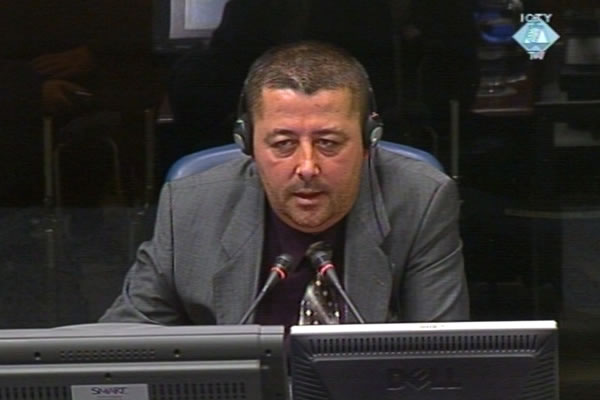 Vojislav Dabic, witness at the Vojislav Seselj trial
As his two-day evidence at the trial of Serbian Radicals’ leader Vojislav Seselj drew to a close, witness Vojislav Dabic was asked a direct question by Judge Antonetti and prosecutor Biersay if he had lied to the OTP investigators when they interviewed him in 2000 and 2004. He denied it, saying, ‘I told them what I knew, saw and heard’.

Previously, when he was examined by the accused, Dabic spoke a lot about what he had ‘heard’, claiming that he had heard most of the things he had shared with the investigators about the role of ‘Seselj’s men’ in the crimes in Mostar and Nevesinje area from his colleagues who talked about it on the frontlines.

Dabic was called to The Hague by the Trial Chamber after he had switched sides. He first gave statements to the OTP, but then decided to testify in Seselj’s defense. He then gave three statements to Seselj’s associates, with a different version of the events in Mostar and Nevesinje. Dabic didn’t contest the fact that crimes in Teleca Lastva and Gornje Nevesinjsko Polje actually did happen. As alleged in the indictment, almost 300 Muslim civilians were killed there, including women and children. The witness recanted on his claims about the role of ‘Seselj’s men’. Today he said that those were ‘nothing but old wives’ tales’. ‘I don’t believe what I don’t see with my own eyes’, he said.

Recanting most of his claims from 2004, Dabic now said his words were mistranslated; he didn’t rule out the possibility that the parts about the involvement of ‘Seselj’s men’ in those crimes ‘were probably inserted by the prosecution’, as the accused repeatedly suggested to him.

Dabic also agreed with the argument put forward by the accused, that the prosecution ‘tricked him’ promising him he would be transferred to a third country if he gave a statement blaming Seselj. In the re-examination, prosecutor Biersay reminded the witness that the investigator who interviewed him told him explicitly that he couldn’t guarantee him a transfer to a third country because such a guarantee ‘would not be proper’ and could be considered a ‘bribe’. The witness replied that he didn’t remember that.

The Trial Chamber eventually admitted into evidence all five Dabic’s statements: he gave two to the OTP and three to the defense. After two days of Dabic’s evidence, the judges will have to decide when the witness did or did not say ‘what he knew, saw or heard’.

Another witness of the Trial Chamber is expected to take the stand next week under the pseudonym VS 1067.