Has Vojislav Seselj been provisionally released for ‘humanitarian reasons’ pending his trial judgment? Or has Seselj actually forced the Tribunal to expel him from the Detention Unit? Is the miscarriage of the 10 years long painful search for the truth and justice the acceptable price for the punishment of a ‘disloyal judge’? 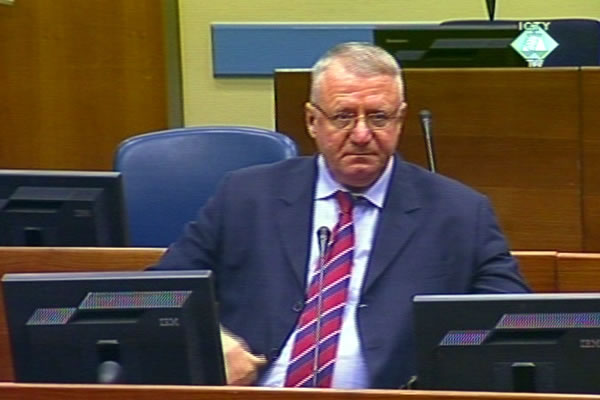 For the second time in the past eight years the International Criminal Tribunal for the Former Yugoslavia (ICTY) has surrendered unconditionally to Vojislav Seselj, who has been on trial for crimes against humanity in Croatia, Vojvodina and Bosnia and Herzegovina. In other words, Seselj was indicted for the very crimes that prompted the UN Security Council to establish the ICTY, the Tribunal in The Hague, in May 1993.

The first unconditional surrender occurred on 8 December 2006, ten days after the trial of Vojislav Seselj failed to begin. The accused demonstratively refused to appear in court to hear the prosecution’s opening statement on 27 and 28 November 2006. Seselj told the judges that they were ‘idiots’ if they thought he would appear in court and sit behind the British lawyer, David Hooper, his court-appointed counsel. The fact thatSeselj, who is defending himself, had obstructed the proceedings for several years led the Tribunal to appoint counsel to represent him. In addition to obstructing the administration of justice, Seselj also intimidated witnesses, disclosed their identity and statements, in violation of protective measures. Furthermore, the accused has been verbally abusive in a very vulgar manner towards the judges, prosecutors, the Registry and even the Tribunal’s translators.

Wary of jeopardizing the right of the accused to a fair trial, the judges have been immensely tolerant of Seselj’s antics, but they seem to have lost sight of the fact that the other parties or stakeholders: the prosecution, the victims and the international community – also have the right to a fair trial. When in November 2006 thedisruptive behavior of the accused became intolerable, the Trial Chamber drew a line and appointed a professional defense counsel to Seselj. Seselj responded by going on a hunger strike, or, at least, by claiming he was going on a hunger strike.

It is important to note that those events happened in 2006, after two of the accused had already died in the ICTY Detention Unit: Slobodan Milosevic and Milan Babic. Those deaths, especially that of Milosevic, shook the ICTY. Its very foundations crumbled as the president and the chief prosecutor bickered and as the internal conflicts in the Office of the Prosecutor intensified. When the alarming news about Seselj’s condition first came in (‘death on the march in the UN Detention Unit’, the then UN Detention Unit chief is alleged to have said), panic began to spread. The Tribunal was motivated by the overwhelming urge to prevent another death in the detention unit at any cost.

The price was unconditional surrender to Seselj’s requests listed in his Motion No. 226 of 7 December 2006.Seselj wanted the Tribunal to ‘revoke’ the appointment of counsel, to submit documents only in ‘writing and in the Serbian language’, to ‘reverse all restrictive measures for visits of Jadranka Seselj’, his wife. Seselj also called for the disqualification of judges Orie, Robinson and Hopfel, for the registration of his team of legal advisors headed by Tomislav Nikolic and Aleksandar Vucic… The Trial Chamber granted all Seselj’s requests in order to make him start taking food.

In purely legal terms, such decisions are deemed void and have no legal consequences because they are the result of coercion. For example, the documents in which Muslims and Croats from Sanski Most, Kotor Varos, Bosanski Samac and other ethnically cleansed places in BH renounced their right to property ‘voluntarily’, ceding it to the Serb authorities, were considered null and void at the trials in The Hague.

The problem is that the Appeals Chamber’s decisions become law and are binding for the Trial Chambers. After December 2006, there were no attempts to appoint counsels to the accused who has been abusing his right to self-representation to obstruct the trial. The judges didn’t want to expose themselves to the risk of being cautioned by the Appeals Chamber for ‘the abuse of their right to discretion’ if they appointed counsel to the accused ‘before the accused was given a real opportunity to show that he understood – despite his previous behavior – that he would have to observe the Rules of Procedure and was ready to do that if he wanted to represent himself'. This is how in 2006, the Appeals Chamber dressed down the experienced judges Orie, Robinson and Hopfel.

The groundwork for the second unconditional surrender was laid in August 2013 when a special panel of judges granted Seselj’s motion to disqualify Judge Frederik Harhoff from the Trial Chamber sitting in his case because of his purported bias towards convicting the accused.

Seselj’s motion was a perfect opportunity for the Tribunal to get rid of the disloyal Danish judge who had dared to speak out in a private letter about what had already been whispered in the Tribunal’s corridors and reported in the global media (such as the New York Times, the Economist, SENSE…). It seemed that even the geese congregating at the pool in front of the Tribunal building realized, after the appellate judgments in the Perisic and Gotovina cases, that the ICTY had changed its course.

Having used Seselj to get rid of the judge who had violated the Tribunal’s unwritten ‘code of silence’, the decision makers obviously lost sight of the consequences of their own decision. Or at least, they chose to ignore them, in line with the principle Fiat iustitia pereat mundus - Let there be justice, though the world perish! True, the world hasn’t perished but the 10 years of labour put in by the judges, investigators, prosecutors and witnesses has been lost. In vain have all of them striven to establish beyond reasonable doubt whether and how Seselj contributed to the crimes for which the ICTY had been established. Obviously, those that made the decision considered it an acceptable price for the punishment of a disloyal judge.

Logically and clearly it was impossible to hand down the judgment after the disqualification of a judge. The trial judgment was initially slated for 30 October 2013. This was why Seselj had sought the disqualification – to prevent the judgment, which had to be rendered by a full Trial Chamber, composed of three judges. Obviously, Seselj believed that he wouldn’t lose anything with the postponement since he himself did nit think he would ever be acquitted. In the meantime, his ‘Russian brothers’ might very well succeed in closing down the Tribunal: after all, this possibility has been mooted ever since Seselj’s arrival in The Hague.

What could not be foreseen was that Seselj would in the meantime fall ill and that his life could be at stake, at least according to the information Seselj has personally circulated. The specter of his death again rose in the Detention Unit, just as it had during his hunger strike.

In late June 2014, it became clear that Judge Niang, who replaced Judge Harhoff, would need at least a year to familiarize himself with the case to be able to join the deliberations. The Trial Chamber, acting in its own initiative, offered provisional release to Seselj: a chance to await the judgment in Belgrade under strict conditions, which included house arrest, police escort, no public appearances… As expected, Seselj rejected the terms with indignation. In order to be granted provisional release, Seselj would have to accept guarantees issued by ‘the traitorous Serbian government’ headed by Seselj’s former followers and advisors Tomislav Nikolic and Aleksandar Vucic.

That same Trial Chamber made the same offer last week. This time, the judges made minimal demands: the accused should commit not to influence the victims and witnesses and to return for the sentencing. When it was clear that Seselj would not agree even to that, the Trial Chamber backed off and declared it ‘believes’ that the accused would comply with those conditions…without making any commitments to do so.

This would be the ICTY’s second unconditional surrender to Vojislav Seselj. We can hope that it is the last. However, it remains to be seen how Seselj’s pending motion from June 2014 will be dealt with. In the motion, Seselj demanded 12 million euros as compensation for the 11 years of ‘groundless detention’.