DEL PONTE: I WAS “MISLED” BY KOSTUNICA

ICTY Chief Prosecutor is disappointed by Prime Minister Kostunica’s failure to honor the commitments to deliver Mladic to The Hague by the end of April. She says she has been “misled” and that the information she received from Belgrade was either “wrong” or “misrepresented” 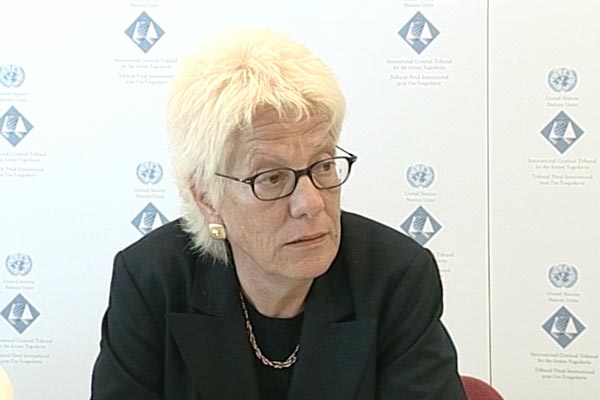 Carla Del Ponte
The fact that Ratko Mladic did not appear in The Hague by the end of April, despite the “commitments taken at the highest level of the Serbian government” leads ICTY Chief Prosecutor Carla del Ponte to conclude that she had been “misled” and that the information presented by Belgrade to substantiate the claim that hi arrest was “a matter of days or weeks” was either “wrong”, or “misrepresented”.

After she presented the negative assessment of the cooperation by Serbia and Montenegro to EU enlargement commissioner Olli Rehn this morning, Del Ponte went on summarize the assessment in three points for the press.

First, while she gives credit to Serbia for “successfully encouraging” a large number of the accused to surrender voluntarily in late 2004 and early 2005, Del Ponte says that since April 2005, there has been no progress in the efforts to locate the remaining six fugitives from international justice. Del Ponte says she is not convinced that the efforts made by the relevant civilian and military authorities have a “focused and coordinated plan aimed at arresting and transferring the remaining fugitives”.

Del Ponte finds it “particularly disappointing” that Prime Minister Kostunica has failed to honor his commitment that Mladic would be transferred to The Hague by the end of April. It seems to her now that the promises were made with a view to persuade Mladic to surrender voluntarily. She says this “expectation is completely unrealistic and simply wrong”.

Del Ponte reveals that in January she received information from Belgrade that the authorities had located Mladic and that instead of arresting him, they had asked him to surrender. When the members of the press told her that PM Kostunica had made yet another appeal to Mladic to surrender, Del Ponte noted that this was “confirming that Kostunica is not ready to arrest him”. In her opinion, it is “scandalous” and proves the “double face approach” of the Serbian prime minister, who told her a month ago he was “ready to arrest him”.
Del Ponte doesn’t know whether the Belgrade authorities “know where Mladic is today”, but she does claim that they “knew it ten days ago”. According to the information she received from reliable sources, as she says, Mladic “knows very well what the authorities are doing and planning and is moving very quickly from one apartment to another in Belgrade or its environs”. The fact that those reports are published in the Belgrade press is, in her view, “proof that the investigators are doing their job unprofessionally”.
Finally, as the third point in her negative assessment of Belgrade’s cooperation, Del Ponte says that the OTP has not yet been given “fully satisfactory access to documents” it has requested from Serbia and Montenegro.

Olli Rehn’s decision to suspend talks with Serbia and Montenegro because of lack of full cooperation with the ICTY was called by Del Ponte “vital support”. If there is no substantial progress by June, Del Ponte will present the same assessment to the UN Security Council, which will then decide what to do to force Serbia and Montenegro to comply with its international obligations.