ARRESTS DEPEND ON GOOD WILL, COOPERATION AND COORDINATION

The Office of the Prosecutor talks to “all those who can help it” in locating the fugitive indictees, OTP spokesperson says. The Vatican could assist in determining the exact location of Gotovina, just as the Serbian Orthodox Church could assist in locating Karadzic. Kostunica has two weeks to keep his promise that Mladic would be in The Hague by 5 October 2005 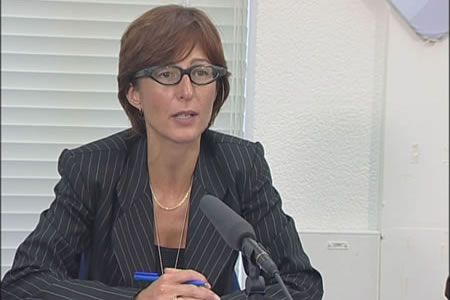 Florence Hartmann, spokesperson in the Tribunal
The OTP “needs assistance from the Vatican” in pinpointing the actual monastery in which the fugitive HV general Ante Gotovina might be, Florance Hartmann said at the press conference today. The prosecution “cannot call the police to arrest anyone, unless it knows Gotovina’s exact location,” Hartmann explained, adding that the prosecution need similar cooperation from the Orthodox churches that might have information about the hiding places of other fugitives.

Noting that Carla del Ponte’s office repeatedly received information about the existence of “Gotovina’s support network in the Franciscan monasteries”, the spokesperson adds that the Vatican is expected to help in the efforts to identify locations harboring Gotovina up to now, his current whereabouts and any places he might turn to for shelter in the future.

“We talk to everyone who might assist us. Arrests depend on good will, cooperation and coordination of efforts from various parties,” Hartmann says, adding that “there is no institution that cannot be appealed to to take a moral stand on justice and international law.” “Crimes against humanity and violations of international humanitarian law are a problem of every person on the planet,” the spokesperson said.

The prosecution continues its efforts to arrest all seven fugitives, she added. Del Ponte will have talks in Belgrade and Podgorica on 29 September and in Zagreb on 30 September. Hartmann repeated that during the prosecutor’s last visit to Belgrade, Del Ponte received assurances that Ratko Mladic would be arrested and surrendered to the Tribunal by 5 October this year. This is the fifth anniversary of the toppling of Milosevic and the date when Serbia should start negotiations on cooperation with the European Union.

ICTY spokesperson Jim Landale added at the same press conference that it is “a deep shame” that the debate on the arrest of Karadzic and Mladic still continues, ten years after they were indicted. The Tribunal will not close its doors until they have been tried, Landale said.